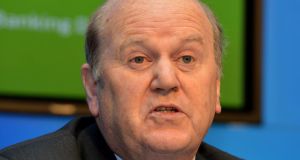 It is sometimes tempting to conclude that policy-making in Ireland is made up as we go along, and that priorities are assigned to those who shout the loudest. Once upon a time, somebody sat down with a blank sheet of paper, designed a well thought-out, evidence-based strategy, one that was discussed and broadly agreed with all interested parties.

Fairy stories are all very well, but the latest medical card debacle is just another in a long line of examples that suggest sound policy design is simply not something we do very often.

The growing debate over Budget 2015 is another case in point.

Unsurprisingly, our next budget is already attracting headlines. Minister Noonan is due to deliver it in less than four months, and his package will carry much more political than economic significance.

These days budgets in many economies are shadows of what they once were: activist fiscal policy is a fast-receding memory. The parameters of the debate, at least in austerity-driven Europe, are set in terms of how large the overall cuts will be and how they will be split between tax rises and expenditure curbs.

In many ways it is a phoney debate, perhaps better described as a well choreographed pantomime. The bad guys – the remnants of the troika and our own Independent Fiscal Advisory Council – run around threatening all sorts of dark deeds if we don’t give them what they want. Meanwhile, we all know how this plot line ends: a budget with more headlines than real policy, one containing something that will loosely be called a tax cut for the coping classes but with an overall extraction of less than €2 billion from the economy. The pantomime villains will be faced down, up to a point at least.

Commentators of a certain political hue often ask why we can’t be more like the Scandinavian or Nordic countries that accept high taxation as a price necessary to pay for superb public services. This caricatured version of what it is actually like to live in one of those countries rarely has a confrontation with facts or even data but higher taxes for better services is a legitimate goal, one that should, in a different world, be part of any debate about fiscal policy.

And part of that question should be, higher taxes for whom? The answers are not as obvious as some seem to think.

The figures show, for example, that we have one of the most progressive taxation systems in the world. They also show that the “tax wedge”, effectively how much people pay out of total income, is very low for low-to-average Irish incomes.

The corresponding figure in Ireland is 6.8 per cent

OECD figures for 2013 show a remarkable consistency when we look at Ireland and compare it to almost any other country. The proportion of people’s income that we take in taxes can be described by a simple curve, one that in the Irish case is very steep, much steeper than most other countries. We do not take much, internationally speaking, from people earning at or below the average wage, particularly if they have children. But that proportion of income taken by the State rises very rapidly as incomes also rise: that’s what we mean by a progressive tax system.

And the figures also show that employers here pay a lot less in social security than the OECD average (which contributes, in some sectors, to higher wages).

This data, these facts, have little impact on the domestic debate. But if we want to be like other countries we are there already for high-earners but we will need to take more from average earners and from employers.

I can hear the shouting already.