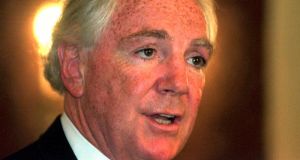 A classical Georgian home owned by Sir Anthony O’Reilly at 2 Fitzwilliam Square in Dublin 2 has been sold at a private auction for €3.2 million – €900,000 more than the original guide price. The new owner is a Dublin-based businessman.

Similar houses were valued at around €6 million before the property crash. Another four-storey over-basement Georgian house in office use at 33 Fitzwilliam Place was sold in 2006 for €5.5 million.

A number of interested parties approached the selling agent after they became aware of the sale through a news article in The Irish Times.

Mr Jordan then invited three parties, including property developer Michael Roden, to a private auction in the Conrad Hotel last Monday. The bidding opened at €2.5 million and rose in bids of €100,000 until the property was knocked down to Billy O’Sullivan of agents McNally Handy, who acted for the purchaser. Contacted yesterday, Mr O’Sullivan said he had “no comment”to make.

One viewer who visited the 6,500sq ft house said it was in “immaculate condition” with three bedroom suites on the upper floors, a drawingroom and diningroom on the ground floor and a further diningroom and kitchen at basement level.

Property owners on the square also have access to the private gardens in Fitzwilliam Square.

Sir Anthony bought the building as a Dublin home and private office in 1996 for a reported €1.27 million.

The one-time billionaire and former chief executive of Independent News & Media is also attempting to sell Shorecliff, his six-acre holiday home in Glandore, Co Cork, for a figure believed to be around €2 million.

The sale comes after AIB initiated legal proceedings to call in a €4 million loan.

1 Air travel never going ‘back to way it was’
2 Should I switch bank now with Ulster Bank at risk of closing?
3 Will brother’s widow get half of our parents’ estate when they die?
4 ‘Tax war’ will hit Ireland if digital tax talks fail, OECD says
5 Will PTSB be Ulster Bank’s knight in shining armour?
6 Pallet manufacturer looks to imports as timber crisis takes root
7 ‘In Denmark, we pay high taxes and health insurance but we get a lot back’
8 Sorry, Domhnall Gleeson, I don’t want to chat to you anymore
9 Household wealth jumps by 74% since last recession – report
10 Tourism and aviation players demand von der Leyen end EU travel chaos
Real news has value SUBSCRIBE