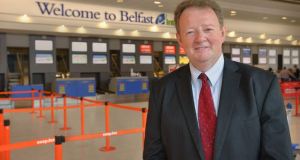 Graham Keddie: ‘It would be great to be able to offer even more direct flights to new destinations for potential investors to come and see what’s on offer here.’ Photograph: Aaron McCracken/Harrisons

Official figures have yet to be released but Dublin Airport is likely to confirm shortly that increased numbers of passengers from the North chose to fly in and out of Dublin last year rather than through one of the three airports in Northern Ireland.

In 2014, a record 864,000 people shunned their local airports and travelled across the Border to fly to and from Dublin Airport. It could have been a sterling/euro exchange advantage or possibly the larger choice of direct flights on offer that may have lured them to Dublin. But Belfast International Airport managing director Graham Keddie says one “regressive” UK tax could also have been a key motivator.

He is referring to Air Passenger Duty (APD), which every passenger departing from a UK airport must pay. It comes in at £13 on short-haul economy class seats and £26 in other classes. There is no equivalent tax on passengers flying from the Republic and Scottish-born Keddie has repeatedly urged local politicians to introduce a more level playing field on the island.

So far the Northern Ireland Executive has not been keen. Politicians argue that the North would naturally have to pay, resulting in a reduction to the block grant it receives from the UK treasury.

Keddie maintains that if the Executive was willing to be more inventive, more airlines would be willing to invest in Northern Ireland, especially if the tax was abolished outright. He says it’s a major deterrent and is preventing Northern Ireland from attracting direct air services. What may make the whole APD pill even harder to swallow for him at the moment is that the Scottish government intends to reduce air passenger duty rates by 50 per cent from April 2018. A recent report by Edinburgh Airport suggested a 50 per cent cut in APD had the potential to create 3,800 jobs by 2020 and potentially inject £200 million into the local economy. Keddie says Northern Ireland could achieve similar results if political leaders followed the Scottish example.

Latest passenger figures for BIA do show strong growth. More than 370,000 passengers travelled through the airport last month, an increase of 12 per cent on the same period last year and up 16 per cent since January. Keddie is confident the airport will grow passenger numbers to five million this year. But he says that, with the right support, there is no reason why the airport could not double in size to more than eight million passengers a year. The airport has already helped deliver hundreds of new jobs this year by wooing Ryanair to re-establish a base there and also by supporting expansion plans by EasyJet and Jet2.

“We’re totally focused on the opportunities. I am always optimistic. We’ve had a really good run this year, our operators are expanding and we have introduced new routes. And more are yet to come, so it’s an exciting time for us.

“We would like more support from our own government. We can deliver on jobs and investment, we’ve shown that we can do that and we’re making Northern Ireland more accessible to increasing numbers of both tourist and business travellers.

“With the advent of lower rates of corporation tax, it would be great to be able to offer even more direct flights to new destinations for potential investors to come and see what’s on offer here,” Keddie adds.

In the meantime, he is confident BIA will do its best to give Dublin Airport a run for its money this summer.