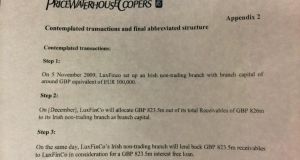 The PwC document outlining the structure of the Dublin operation 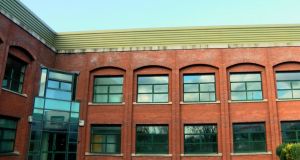 The office block at Red Cow Business Park, on the Naas Road, Dublin where Northern and Shell set up a one-man operation in Ireland to hold €1 billion (£823.5 million) in assets as part of a tax avoidance measure, documents from PWC Luxembourg show.

The operation, an Irish branch of a Luxembourg company, had an address at the Red Cow Business Park, on the Naas Road, Dublin, where it paid a deposit of £334 when renting office space on a one-month rolling basis.

The office was part of an advanced tax agreement and a structure put in place in 2009 by Northern and Shell with the help of PwC in Luxembourg. Northern and Shell owns the Star and Express titles in the UK, along with OK! magazine and other media assets.

Documents seen by The Irish Times show how the media group took steps in late 2009 to ensure assets it had built up in Luxembourg as part of an intra-group financing scheme did not become subject to a 0.5 per cent wealth tax that would become due at the end of the year.

While the effect of the structure is not documented, it may have saved Northern and Shell a total of £20 million in Luxembourg wealth tax, over a four year period. A request to the company for a comment met with no response.

In a letter to Marius Kohl of the Luxembourg tax authority in November 2009, Catherine Dupont, a partner with PwC, sought clearance for plans to establish an Irish branch of the Luxembourg company, Northern & Shell Luxembourg Finance Sarl.

The Irish branch would be tax resident in Ireland and so when the value of the Luxembourg company was being assessed on December 31st, 2009, for the purposes of Luxembourg’s net wealth tax, the assets allocated to the Irish branch would not be taken into consideration, Ms Dupont proposed. Mr Kohl responded that he agreed with her interpretation of the Luxembourg tax rules in relation to the proposed transactions.

Ms Dupont said the non-trading Irish branch would be considered a permanent establishment in Ireland, subject to Irish tax jurisdiction, because of a number of factors. These included the fact that it would have an office space and an Irish address, a desk, fax and other equipment necessary for carrying out its activities, would have its name displayed on its premises, have its own bank account, and have separate accounting records.

“At least one manager will be appointed,” she said. “This manager will be in charge of the daily management of the Irish branch. He will, among other [functions], assist with the lending of funds and manage the loan to” Northern & Shell Luxembourg Finance.

On December 3rd, 2013 the registry was informed by Beauchamps solicitors, Dublin, that the Irish branch had been closed and a copy of the minutes of a meeting of the Luxembourg board of managers held on the same day, was enclosed.

The minutes recorded the decision to close the Irish branch with effect from December 3rd and to revoke Mr Sinclair’s appointment as the branch manager. It was noted that Mr Sinclair’s contract included a provision to pay one month’s salary in lieu of notice.

It was also agreed that the Irish branch “cease renting office space at Red Cow Business Park” and it was noted that the lease was on a one month rolling basis. The branch owed £665 to its landlord and the landlord owed £334 to the branch arising from a rent deposit. The difference, of £331, would be settled in cash, the board minutes noted.

The chairman, Paul de Haan, noted that on December 9th, 2009, the company had allocated a portion of a receivable asset to the branch for an aggregate value of £823,566,000 as branch capital, and that there was an on-demand loan agreement of the same date, subject to which the branch was owed £823,566,000 by the company. He proposed that the capital be set off against the loan as part of the closure of the Irish branch.

It was agreed that a debt of £1,567 owed by the branch to the Irish Revenue Commissioners would be settled, and that Mr Sinclair would be authorised to take all steps necessary to close the branch down, including terminating his own employment.

Mr Sinclair is head of finance Ireland with the UK media group, UBM, but has done branch management work on a consultancy basis.