North’s proposed 12.5% tax rate ‘will not be enough’ to attract investment 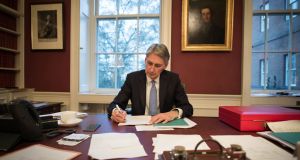 Northern Ireland’s proposed lower rate of corporation tax of 12.5 per cent from April 2018 will “will not be enough to attract inward investment on its own”, a leading accountancy firm has warned. EY Northern Ireland believes the UK chancellor’s commitment in his autumn statement on Wednesday to reducing the overall UK rate to 17 per cent by 2020 will also raise questions over whether the differential between the two rates is sufficient.

The current UK rate is 20 per cent but Michael Hall, managing partner at EY Northern Ireland said the North’s proposed 12.5 per cent would have looked more attractive to investors when the UK rate was higher. “In addition, FDI looking to access European markets is impacted by Brexit, thus potentially making the Republic of Ireland more attractive,” Mr Hall warned.

He said the result of the US presidential election was also a concern for the North and its plans to capitalise on a much lower rate of corporation tax.

“If president-elect Donald Trump reduces the corporation tax rate in the US significantly, this will be a reason for US businesses to look to invest at home rather than abroad,” Mr Hall added. “Taking all of this together, we believe Northern Ireland will need to do more than just reduce the NI corporation tax rate, rather it will need to take a holistic view and look at areas such as workforce skills, further enhancing our infrastructure, and university courses to support business.”

The North’s minister of finance, Máirtín Ó Muilleoir, said the confirmation by the UK chancellor that the British government intended to move to a rate of 17 per cent would allow the Executive to progress its own plans. “Now we have clarity on the British government’s plans,” he said, “we can move into intensive negotiations on the practical outworkings of this derogation.”

Northern Ireland will receive an extra £250 million (€295 million) to spend as part of the autumn statement. Mr Ó Muilleoir however has cautioned that this would “not reverse” the reduction to Northern Ireland’s resource budget.

“The chancellor’s announcement does not reverse the 4.1 per cent real terms reduction in our resource budget which pays for the everyday running of public services,” he added.

The UK government says it is up to the Northern Ireland Executive to decide how it wants to spend the boost to its capital budget. Where it is likely to allocated is expected to be outlined by Mr Ó Muilleoir when he unveils his budget to the Assembly next month.

In general the North’s business community has responded positively to the autumn statement. According to Ann McGregor, chief executive of the Northern Ireland Chamber of Commerce and Industry the extra funding announced by Philip Hammond for both infrastructure and innovation will be well received across many sectors.

Ms McGregor said road schemes, such as the York Street Interchange in Belfast, urgently need investment and this would in turn help businesses “move products and goods more efficiently and in the process reduce costs”.

John Armstrong, managing director of the Construction Employers Federation, also believes a number of Mr Hammond’s initiatives could deliver a positive boost for the North’s construction industry but he now wants the attention to turn to the Executive budget for 2017-21. He said that must deal with key challenges such as the need for greater accountability around the “timely delivery” of the Executive’s infrastructure pipeline.

Meanwhile the regional director of the Confederation of British Industry (CBI) NI, Angela McGowan, said that while many of the chancellor’s priorities such as support for future investment and raising productivity levels would benefit the North, it would also not be immune to the “economic cost of Brexit”.