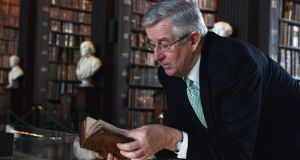 Co Kerry-born economist Richard Cantillon made his name and fortune in the 1700s but he could give expert lessons today on financial market strategy, says an assessment by his biographer Antoin Murphy.

Prof Murphy’s new translation of Cantillon’s masterpiece, Essay on the Nature of Trade in General, is published today at a forum in Tralee.

The thrice weekly business comment in The Irish Times is named after Cantillon, one of the founding fathers of modern economics.

Cantillon was born in Ballyronan in the parish of Ballyheigue between 1680 and 1690 and had emigrated to France by 1708. A variety of business ventures followed. He became a millionaire in the Mississippi System, the world’s first financial bubble.

Written in French between 1728 and 1730, Cantillon’s original Essai was published posthumously in 1755.

The new edited translation from the French is published by Liberty Fund. Successive generations of economists have been using an English language edition from 1931, notes Prof Murphy.

In his introduction to the modernised text, he cites its “considerable” influence on Adam Smith and other luminaries of the discipline.

“He knew the world of money, banking, and financial institutions intimately.

“He had confidently identified the fault lines of both the Mississippi System and the South Sea scheme, enabling him to make a fortune from both of these stock market bubbles.

“He had become such an expert on shorting financing markets and currencies that he could have given masterclasses to many modern exponents of such strategems.”