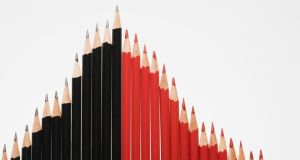 Indications of rapid growth: Managing the economy and avoiding another boom-bust cycle will take skill. Having a government would help. Photograph: Steve Hix/Somos Images/Corbis

Since the middle of 2012 the Irish economy has returned to a sustained period of rapid growth. This recovery is confirmed by employment figures, which have shown continued growth in each quarter. However, the headline figures, although eye-watering, can be misleading.

In a previous article I pointed out how Ireland’s aircraft leasing sector, as well as other multinational activity, can distort the data on national output. Two exceptional factors are again clouding the picture in the most recent GDP data: the profits of a few companies, referred to as “redomiciled plcs”, and investment in research and development, primarily by foreign firms.

A small number of special foreign-owned investment companies – probably fewer than 20 – have their headquarters in Ireland and receive their profits here. While they pay some dividends to their foreign owners, much of their profit is retained in the company, so that their owners take most of the benefit in the form of a capital gain. The national accounts show this as a net inflow into Ireland, making it look as if it is Irish people rather than the foreign owners who are benefiting.

These transactions raise GNP, although this apparent increase in income is not owned by those living in Ireland. However, because it adds to GNP it also raises the Irish contribution to the EU budget while conferring no benefit to Ireland.

Ireland effectively pays a tax to the EU of between €50 million and €100 million a year on the activities of these “redomiciled” companies.

While the activities of these companies had levelled off in recent years, they began to grow again last year, probably driven by mergers.

If this artificial boost to GNP is taken out of the reckoning the underlying growth in GNP last year was probably closer to 5 per cent, rather than the 5.7 per cent recorded by the Central Statistics Office (CSO).

While still a very creditable performance, it’s not quite as stellar as the figures suggest.

Last year this investment exceeded €10 billion. Much of this R&D takes the form of a purchase of a licence or patent from abroad rather than funding scientists beavering away in Ireland.

This investment will obviously increase the measured output of the affected foreign firms in Ireland over the coming years. However, most of this output will flow back out of Ireland as profits.

This means that while investment last year looks like it was a healthy 25 per cent of GNP, the true figure for the kind of investment that would bring about future expansion of real output in Ireland was probably significantly below 20 per cent of GNP, too low for a recovering economy.

While the growth figures for GNP published last week hit the headlines, the figures published on the current account of the balance of payments received scant attention. However, these are a significant indicator of whether the growth in the economy is sustainable.

On the face of it Ireland is running a large surplus on the current account of the balance of payments of 5.3 per cent of GNP. However, when the profits of the redomiciled plcs are deducted, that surplus disappears. This is one indicator suggesting that the economy is approaching its capacity level of output.

Our level of normal investment is low, and we have a significant housing shortage in the major cities and commuter belt. Over the next few years we need a major expansion in investment, especially in housing.

Such increased investment will sustain an elevated growth rate in GNP, but high growth will tend to suck in imports. That is likely to cause an increasing current account deficit in the balance of payments, reflecting the fact that the economy is probably growing more rapidly than its underlying potential.

Running the economy above capacity is not sustainable for any length of time. Managing the economy and avoiding another boom-bust cycle will take skill. Having a government in place that can take decisions will be important.