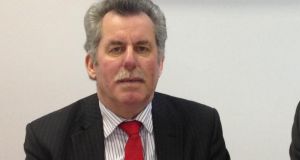 Alban Maginness: says it is important that Northern Ireland’s integrity as a place to do business is not undermined by any further revelations from the sale of Nama’s loan portfolio

Could business reputation suffer as a result of the allegations and speculation surrounding the sale of Nama’s former loan portfolio in the North?

The emergence of a bank account boasting an as yet unexplained but healthy balance of £7 million, which was linked to Ian Coulter, the former managing partner at one of Northern Ireland’s leading law firms, has naturally sparked some excited chatter among the local business community.

Coulter and Belfast-based Tughans had played a role in the sale of Nama’s former loan portfolio to the US investment firm Cerberus Capital Management for £1.3 billion last year.

There has been no chatter from Coulter himself who has remained silent on the claims made by Independent TD Mick Wallace in the Dáil, that the £7 million had been resting in the account “reportedly” pending distribution to other people who had a role in the sale of the Nama portfolio which comprised loans with a par value of £4.6 billion.

But the chatter – both inside Northern Ireland and further afield – about the sale of Nama’s former portfolio could be decidedly unhelpful, according to Alban Maginness, a key member of an influential Northern Ireland Assembly body which exists to foster closer ties between politics and business. He firmly believes it could damage the North’s business reputation at home and crucially internationally.

Maginness, chair of the SDLP Assembly group, is one of seven politicians who are members of the Northern Ireland Assembly and Business Trust. He says it is important that Northern Ireland’s integrity as a place to do business is not undermined by any further revelations from the sale of Nama’s loan portfolio.

“There are lots of unanswered questions that need to be answered in order to provide clarity on what took place when Nama’s Northern Ireland loan portfolio was sold. Because unless we get answers, any suggestion of financial irregularities or undisclosed deals reflects poorly on Northern Ireland as a place to do business,” Maginness says. “There needs to be full disclosure about the transaction process.

He believes the only way the truth will come out is if the Northern Ireland Assembly appoints an independent investigator with significant authority to examine the whole spectrum of the sale of Nama’s portfolio in the North.

“The first thing that needs to happen is that the Assembly should meet this week to discuss the sale of the Nama portfolio and then we need an independent figure to examine why these loans were offloaded in this manner.

“We have no idea what the criteria were for the sale, why it happened when it did or the nature of the deal and it is important that the Assembly establishes the facts,” Maginness adds.

Since the Northern Ireland Assembly and Business Trust (NIABT) was established in 2002, he says, it has succeeded in creating good working relationships between politicians, local businesses and key stakeholders in the Northern Ireland economy. One of these in the past was Nama. Key individuals from the agency would have regularly briefed the NIABT on its work locally.

According to Maginness the agency was always “upfront” about its role and its objectives in Northern Ireland. However he said there were now issues surrounding the sale of Nama’s portfolio in the North that could not be ignored. “If something was wrong about the sale process, that needs to be uncovered by the Assembly.”

The Assembly’s committee for finance and personnel is scheduled to hold a public session to discuss issues “relating to the sale” of Nama’s former assets in Northern Ireland. The sale took place last year against the backdrop of an inquiry in the UK by a powerful House of Commons committee into the Northern Ireland banking structure.

The Northern Ireland Affairs Committee said it received a briefing from Cerberus European Capital Advisors immediately following its acquisition of the Nama portfolio. According to the committee, as the briefing was “in private, and commercially confidential information was disclosed, we are unable to make that information publicly available”.

However it has stated that it was informed by Cerberus that it “would be acting in the best interests of Northern Ireland and, like Nama before them, would not embark upon a ‘fire sale’ by going for quick fixes and flooding the property market, thereby driving down property values in Northern Ireland”.

Laurence Robertson, the MP for Tewkesbury, who last month was re-elected chair of the North committee, says he believes it may look at Nama’s legacy in the North.

“It would not be for us to look into any accusations of illegality – that would be for the police and or HM Revenue & Customs – but we would be interested in the wider practice of Nama and its successors,” he says.

What impact this might have on Northern Ireland’s reputation as a business location is anybody’s guess at this stage.

1 Will your boss let you work long-term from home – or from abroad?
2 Oil price slump weighs on global markets
3 Ryanair signals possible closure of Cork and Shannon airport bases
4 Plans for €2bn Dart expansion lure Bombardier to Dublin
5 McGuinness faces Brexit and Covid grilling at parliamentary hearing
6 Virgin Media unveils new entertainment platform
7 Wexford Solar bought by energy giant EDF in deal to build eight solar farms
8 There may be trouble ahead for the housing market
9 Subway bread too sweet for the Irish tax authorities
10 Only half the homes needed this year will be built, construction event told
Real news has value SUBSCRIBE