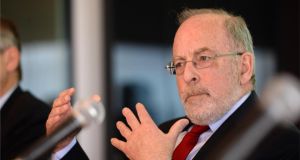 Governor at the Central Bank Patrick Honohan: said that such measures were fairly crude but said that similar rules largely succeeded in keeping Irish lenders out of trouble in decades gone by. Photograph: Dara Mac Dónaill/The Irish Times

Consumers will face new restrictions in January on the amount of money they can borrow to buy a house or apartment as the Central Bank moves to damp down the property market.

As values recover rapidly in Dublin, the Central Bank’s intervention is seen as an effort to prevent the risk of a new price bubble by placing limits on the amount of money banks can lend for mortgages.

The Central Bank will set out proposals today to impose new loan-to-value limits on mortgage lending, as well as loan-to-income caps.

“Can it work? Yes. Will it have the desired effect? Yes,” he told a gathering of economics students in UCD. “I believe it will ensure that there’s no credit chasing – prices chasing a credit spiral again.”

On next week’s budget, Prof Honohan reiterated the Central Bank’s warning that the Government should aim to comfortably exceed the 3 per cent budget deficit target which it must achieve to comply with EU rules.

Although he said the Central Bank’s advice “meshes” with that of the Fiscal Advisory Council, he declined to say whether he agreed with the council’s declaration that the Government should proceed with a €2 billion fiscal retrenchment in the budget.

“But given how badly banks misjudged risk-management in the post-millennial boom in Ireland, it is hard to deny that having a rule constraining loan-to-value and loan-to-income could avoid the re-emergence of this kind of problem in the future.

“Even in the absence of a credit-driven bubble, there is much to be said for bringing back some overall rules of this type, limiting the share of their mortgage lending that is at high loan-to-value and loan-to-income rates, especially now that the property market has stopped falling and has indeed turned around with a bit of a bang in Dublin.”

Prof Honohan declined to specify how the new procedures would be applied but said they would encompass a level of flexibility. However, he said it was clear some people who would like to enter certain transactions would not be able to.

Asked whether he was especially concerned about the rise in Dublin values, he described the present trend as a bounce-back from unexpectedly low levels in the wake of the crash. “It’s a very fast price increase and so this is a regime we want to have in place anyway,” he told reporters.

There will be a public consultation after the bank sets out its proposal today but he expects the new rules will be in place from the start of 2015.

Although he acknowledged some banks had increased variable mortgage interest rates even as the European Central Bank cut rates to a record low, Prof Honohan argued against the introduction of mandatory ceilings on interest rates.

“Control of retail interest rates by the Central Bank is not provided for in legislation, and I believe it should remain so . . . There is an important political economy dimension here. If the local banks are charging unnecessarily high interest rates, that will be an inducement for new entry into lending here, and that [reversing the trend of the past few years] would be very welcome and would have the effect of bringing both pricing and the quality of banking services to a much better place.”