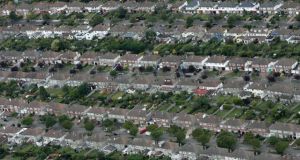 More than 22,000 mortgage loans drawn down last year, representing an increase in lending of 48 per cent over 2013. Photo: Frank Miller/The Irish Times

More than 22,000 mortgage loans drawn down last year, representing an increase in lending of 48 per cent over 2013, according to BPFI/PwC mortgage market monitor.

The market monitor shows the number of mortgages drawn down last year was the highest level since 2010.

The BPFI/PwC mortgage market profile shows that 7,583 mortgages were drawn down in Q4, bringing the 2014 total number of mortgages issued to 22,119. The total value of mortgages drawn down last year amounted to €3.9 billion.

While there was a 33 per cent increase in house completions in 2014, comparative figures produced by Goodbody show Ireland’s current house completion rate is well below the European average, according to BPFI economist Ali Ugur.

He said relatively low levels of mortgage debt among people under 35 could play a significant role in driving pent-up demand for future housing requirements in Ireland.

“It is not clear yet what the effects of these new regulations will be on the mortgage market, the rental market and the wider housing market, including new house building. However, the supply of housing units will still be a key factor in determining prices and affordability in the near future,” he added.