Monthly salary after tax of €8,900 needed to live in Dublin 2, report claims 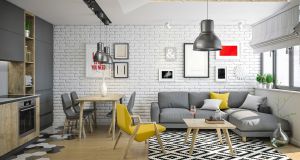 A monthly salary of €13,012 is needed for a Dublin 2 family apartment. Photograph: iStock

A single person needs to earn over €8,900 after tax per month to rent their own apartment in one of Dublin’s most expensive rental areas, a report shows.

The 2019 Neighbourhood Price Index produced by Nestpick, an aggregator website for furnished apartments across the world, shows that renting a single bedroom apartment in Dublin 2 would require a monthly salary of €8,903.11.

A worker on the minimum wage would, meanwhile, need to work more than 279 hours to pay the monthly rent in the same area, which includes the south Docklands and the south city centre.

This makes Dublin 2 more expensive for a one-bedroom apartment than the City of London, Kensington and Chelsea, Hong Kong island, and some parts of San Francisco.

Dublin 2 places 26th overall, out of 740 results, with residential apartments costing €52.27 per square metre for a single person apartment and €37.02 for a family apartment. A monthly salary of €13,012 is needed for a Dublin 2 family apartment.

The City of London tops Nestpick’s list, with a monthly salary of €43,397 required for a family apartment and €8,803 for a single person’s apartment. San Francisco’s financial district and Hong Kong Island come in sixth and eighth place respectively for the combined average.

The most affordable district across the 50 countries surveyed was Gropiusstadt, in Berlin, where a monthly salary of €1,754 would be needed to pay rent in a family apartment. Regions in Stockholm, Montréal and greater Manchester also performed well.

In the Republic, Nestpick used data from property website Daft.ie. The study’s basic assumption is that about a third of a person’s disposable income should go on rent. The company defines a single person apartment as around 50sq m (plus or minus 10sq m) and a family apartment as 105sq m( plus or minus 15sq m). The monthly salary requirement incorporates an area’s rent per sq m and the average apartment size.

The research found a worker on the minimum wage would need to work more than 279 hours to pay the monthly rent in Dublin 2. That compares to fewer than 36 hours in Ahuntsic Cartiervill in Montréal and 977 hours in Bermuda’s city of Hamilton.

“One clear takeaway from this study is that the salaries needed to live in a lot of the world’s most popular neighbourhoods are above the average wages of the cities themselves, which shows that the cost of real estate is growing faster than wages,” said Nestpick managing director Ömer Kücükdere.

“Although this is being tackled creatively with company commuting buses for example, more needs to be done to tackle the disparity between rent and salaries if we want to halt this alarming trend from affecting more cities around the world,” he added.