Merkel says it is up to Greece to make next move

ECB to decide on Greek funding on Wednesday - Nowotny 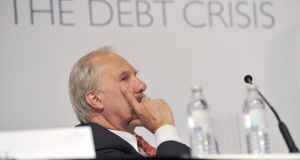 Ewald Nowotny: “I assume that the majority of Greeks want to stay in the euro area, so I can imagine that this is a basis for new negotiations”

German chancellor Angela Merkel told a leadership meeting of her Christian Democrats (CDU) on Monday that it was up to Greece to move in the reform standoff with its euro zone partners, according to participants.

Ms Merkel also told senior CDU colleagues that decisions on Greece could only be taken on a day-to-day basis given the current level of uncertainty, the participants said.

The ECB’s governing council will meet on Wednesday to decide whether to increase emergency funding to Greek banks, council member Ewald Nowotny said on Monday.

Asked if the ELA emergency liquidity would be raised before a referendum on Greece’s creditors’ bailout terms next Sunday, he said: “On Wednesday we have another meeting of the ECB council where this is on the agenda. I don’t want to anticipate this... Now the ball is in Greece’s court.”

“I assume that the majority of Greeks want to stay in the euro area, so I can imagine that this is a basis for new negotiations (but) there are many uncertainties here,” Mr Nowotny said of the referendum.

Initial Covid-19 impact on commerce the tip of the iceberg 05:41
Educational technology company Code Institute raises €1.2m 05:21
‘Things were tight then, my mother was raising us on her own’ 05:20
Workers may face tax bill on emergency State wage subsidy 05:05
Business This Week : Focus firmly on economic indicators 18:00