‘Maybe it’s better for Greece to just leave the euro’ 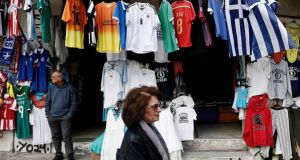 A shop owner stands at the entrance of his shop, which sells Greek national flags, Greek themed souvenirs and soccer jerseys, at the Monastiraki district in Athens, March 16th, 2015. German sentiment is hardening against the Greeks, a new survey shows. ( Photograh: Alkis Konstantinidis/Reuters)

Berlin cabdriver Jens Mueller says he’s had it with the Greek government and he doesn’t want Germany to send any more of his tax money to be squandered in Athens.

“They’ve got a lot of hubris and arrogance, being in the situation they’re in and making all these demands,” said Mr Mueller, 49, waiting for fares near the Brandenburg Gate. “Maybe it’s better for Greece to just leave the euro.”

Mr Mueller’s sentiment is shared by a majority of Germans. A poll published March 13 by public broadcaster ZDF found 52 per cent of his countrymen no longer want Greece to remain in Europe’s common currency, up from 41 per cent last month. The shift is due to a view held by 80 per cent of Germans that Greece’s government “isn’t behaving seriously toward its European partners”.

The hardening of German opinion is significant because the country is the biggest contributor to Greece’s €240 billion twin bailouts and the chief proponent of budget cuts and reforms in return for aid.

Tensions have been escalating between the two governments since Prime Minister Alexis Tsipras took office in January, promising to end an austerity drive that he blames on Chancellor Angela Merkel. The shift in sentiment comes as Greece, at risk of running out of cash this month, battles with European officials over the release of more bailout funds. Tsipras will join European leaders Thursday for talks in Brussels.

Tsipras has also stepped up calls for war reparations from Germany for the Nazi occupation during World War II and Greek finance minister Yanis Varoufakis has been locked in a war of words with his German counterpart Wolfgang Schaeuble.

Last week, the Greek government officially complained about Schaeuble’s conduct, to which Schaeuble replied that the whole matter was “absurd.”

“The way the Greeks have been behaving has been impossible. Now they’re making their own demands with these reparations,” said Dorli Schneider, an interpreter waiting for a train at Munich’s central station. “Greece should pay back what they owe. We can’t forever give them more money.”

German voters’ growing umbrage may make it harder for Merkel to sell any possible deal down the road to the German public and Bundestag, which would have to vote on it. She also has to be wary of the anti-euro AfD party trying to peel off her voters, said Juergen Falter, a political scientist at the Johannes Gutenberg University in Mainz. “The pressure is coming from two sides: the public and some opposition parties,” he said. “The government will probably now react more decisively.”

Some in the community of 315,000 Greeks living in Germany say they sense the hardened view that has developed as the crisis drags on. “People are now quicker to point the finger, and the tone is becoming more aggressive,” said Kostas Tassopoulos, who came to the German capital in 2008 and has thrived producing electronic music under his stage name Ekkohaus. “It’s a bit silly of the Greeks to say their problems are the Germans’ fault, and it’s just as silly that the Germans are trying to put all the blame on the Greeks.”

While Ms Merkel’s government says Greece doesn’t have a blank cheque to do as it pleases, Germany’s official aim is to keep the euro area together. Just 40 per cent of Germans now say they want Greece to remain in the euro.

“The German government could support the Greeks more,” said Manfred Ukleja, a 55-year-old teacher. “The Greeks are founding fathers of the European Union, and they have more significance than just their economy.”

Nonetheless, many Germans say they’ve lost faith in Greece. According to the ZDF poll, 82 per cent of respondents doubt that Greece will honor its agreed budget cuts and reforms, while only 14 per cent trust that it will follow through. The poll was conducted March 10-12 and has a margin of error of plus or minus three percentage points. “The current government’s comments are not credible,” said Geralt Czermin, a 60-year-old construction worker from Augsburg. “I think as it stands, Greece should leave”.