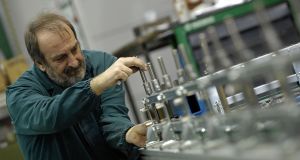 The number of claimants on the Live Register fell again last month as the Republic’s jobs-rich growth continues to drive down unemployment.

The latest monthly numbers from the Central Statistics Office (CSO) show the number of people signing on dropped by 4,100 (1.8 per cent) in May, bringing the seasonally adjusted total to 224,900, its lowest level since July 2008.

Unemployment fell to a new post-crash low of 5.8 per cent in May, according to separate figures published this week, and has now declined by over 10 percentage points since 16 per cent rate recorded in December 2011.

On a seasonally-adjusted basis the latest Live Register shows a monthly decrease of 2,700 men and 1,400 women in May. The number of long-term unemployed people on the Live Register at the end of May was 94,697, which equated to an annual fall of nearly 17 per cent.

There were 46,917 casual and part-time workers on the register, which represented 21 per cent of the total.

A breakdown of the figures shows craft workers remained the largest occupational group on the register, accounting for 17.3 per cent, despite the fact that the number in the group fell over the year by 8,731 to 38,737.