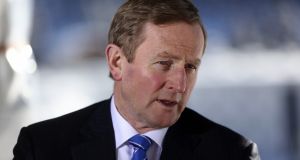 Enda Kenny in Davos yesterday: the 90-minute debate on “rebooting the global economy” was not his natural territory, as the discussion delved into the nuances of labour patterns and emerging market developments. Photograph: Simon Dawson/Bloomberg

It was a case of back to school for Enda Kenny as he took his seat in the Alpine High School in Davos yesterday. It was a far cry from last year when the Taoiseach was a keynote speaker in the centre’s main Congress hall.

This year he was exiled to the nearby High School while EU counterparts such as David Cameron, Dutch leader Mark Rutte and French prime minister Manuel Valls took the limelight in the main Congress hall.

Nonetheless, the Taoiseach was in illustrious company as he took to the stage along with Nobel-prizewinning economist Joseph Stiglitz. The Taoiseach looked decidedly fidgety as he knuckled down beside one of the world’s great teachers of anti-austerity economics.

The 90-minute debate on “rebooting the global economy” was not Kenny’s natural territory, as the discussion delved into the nuances of labour patterns and emerging market developments.

Nonetheless, he did snap to attention during the panel discussion when a German politician asked about corporate tax, launching a passionate defence of Ireland’s corporate tax regime and dismissing any characterisation of Ireland as a tax haven as “false, baseless and untrue”.

Similarly, there was a barely there “told you so” smile when Stiglitz commended Ireland on its economic turnaround, sheepishly conceding Ireland had emerged the best of the euro zone countries subjected to a bailout austerity programme. Who was the pupil now? Still, they must have hit it off – both shared a car back to the main Congress centre.

There were plenty of others flying the Irish flag at Davos.

Niamh Scanlon (13), named EU Digital Girl of the Year last month, was thrilled to be at Davos where she has been mentoring local kids on coding as part of a CoderDojo event. She also had time to share a selfie with rapper and educational campaigner will.i.am.

The team from the Web Summit are also in town with Daire Hickey hosting a tech event in Klosters on Tuesday attended by IDA chief Martin Shanahan. No hard feelings it seems after last year’s decision to move the Web Summit to Lisbon.

U2 frontman Bono who addresses delegates today received a boost for his RED initiative, with the announcement of a $5 billion investment by Salesforce.

Davos-regular Denis O’Brien is also attending and wrote an article for the World Economic Forum website. As well as his musings on changes in technology, he delves into the issue of female representation in business in an analysis that would give Sheryl Sandberg a run for her money. Noting that six of Digicel’s 23 chief executives are women, and 45 per cent of its total global workforce is female, he says that “their dedication and high levels of emotional intelligence” have contributed to the company’s success since its foundation.