John FitzGerald: Time to build on our economic turnaround 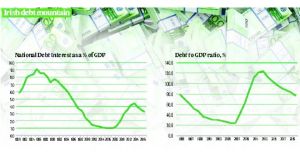 When climbing an Irish mountain there is often disappointment – you think that the summit is just over the next ridge only to discover that there is still more climbing to be done.

The tale of the Irish national debt during the recent crisis was a bit like climbing a mountain: as things got worse each year it looked as if it would soon peak, but new problems were then discovered that pushed it ever higher.

However, things have turned out better than the most gloomy prognostications: the debt/GDP ratio is now declining, the burden of the interest on the debt is exceptionally low, and we may get back a significant part of the money we had to put into the banks.

The advent of the crisis saw gradually increasing fears about how high the mountain of government debt would rise.

Some pessimists believed the burden of debt would prove unsustainable. The nadir was the autumn of 2010 when the interest rate faced by the government climbed to exceptional levels; effectively the government was no longer able to borrow at any feasible interest rate, leaving it with no option but to seek the assistance of colleagues in the EU through a bailout.

The agreement reached with the troika in December 2010 provided the government with access to all the funding it needed at what then appeared to be an acceptable interest rate.

The bulk of the funding came from other euro zone governments and the IMF, but a significant contribution also came from Denmark, Sweden and the UK.

The assistance from the last three governments was volunteered by them in solidarity with the Irish government, and it was also provided at a very attractive interest rate. (They did not provide similar assistance to any other governments).

Subsequent negotiations between the EU and Greece saw the interest rate on borrowing from the EU cut for all countries, including Ireland.

While Ireland has brought its government deficit down steadily from its peak in 2009 of 11 per cent of GDP, the need to borrow every year to keep schools open and pay welfare payments in the teeth of a massive collapse in government revenue added almost €100 billion to the debt between 2009 and 2015.

In addition, the funding put into the banks amounted to over €60 billion. So Ireland’s national debt rose by around €160 billion since the crash, and the debt/GDP ratio peaked at 123 per cent in 2013.

However, the effective burden on the Irish economy of this debt, as measured by the debt interest to GDP ratio, shown in Figure 2, has proved much lighter than might have been anticipated because of very low interest rates and our success in converting high-interest rate IMF debt into debt at lower rates.

However, this year debt interest will fall below 4 per cent of GDP, and will fall further over the rest of the decade, leaving additional fiscal space for the next government.

Thus even with a high level of debt the burden on the economy is dramatically lower than when Ireland exited the previous financial crisis of the 1980s and it has not held back an economic recovery.

Even if growth over the rest of the decade slows gradually from 2014’s exceptionally high rate the value of GDP will continue to rise, reducing the burden of the debt. Continued growth would also allow the next government both to run a balanced budget over the period 2016-20 and still achieve some improvement in the quality of public services.

It is a plausible scenario that the debt/GDP ratio could fall below 80 per cent of GDP by 2020.

The government-owned banks are being restored to financial health. There is now the prospect that Ireland may be able to recover about half of the very large sum needed to recapitalise the banks after the crash. If a successful sale of the banks can be completed by 2020, that could further lower the debt/GDP ratio to 70 per cent.

This would bring our debt back down to German levels.

Fiscal policy must be framed with such uncertainty in mind. Nonetheless, the low interest payments, which are locked in for the next decade, will continue to limit the burden of the debt on the economy. Our bailout will ultimately prove to have been achieved on pretty favourable terms.

There are two issues where there is a legitimate sense of grievance. The first relates to the requirement to repay the unsecured bondholders in Anglo Irish Bank. However, while the total amount involved, around €5 billion, is infuriating, it is nevertheless only a small fraction of the cost of the banking collapse.

The second has been the failure by EU governments to deliver on their apparent commitment in 2012 to share the burden of recapitalising the banks. This may turn out to be to Ireland’s advantage if we are now able to realise more when we sell the banks on the market than we would have been offered in 2012.

It is now time to move on from our grievances and build on the results of a successful turnaround in the economy.