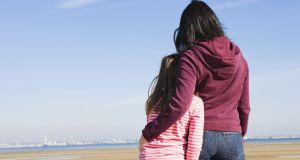 A significant social change over the past 40 years has been the gradual disconnection between the decision to get married and the decision to have children. Photograph: Thinkstock

Up to the 1970s, Irish family formation largely followed a traditional pattern of marriage followed by children. Those who married had fairly large families, but a relatively high proportion of women remained permanently unmarried, which in John Charles McQuaid’s Ireland generally meant being single and celibate.

In the first six decades of the State, few children were born outside marriage; in 1960, for example, these counted for just 1.5 per cent of all births. Often the outcome of an unmarried pregnancy was a hastily arranged wedding followed by a “premature” first baby.

Up to the early 1950s, many women who gave birth outside marriage did so in mother and baby homes. Their children, if they survived, were placed in orphanages or adopted abroad. From 1953, adoption in Ireland was made legal, and resulted over the next three decades in about 1,000 children a year being placed for adoption.

From Independence, CSO Vital Statistics reports underlined this huge loss of young life. But as far as the wider Irish society was concerned, it remained hidden in plain sight. 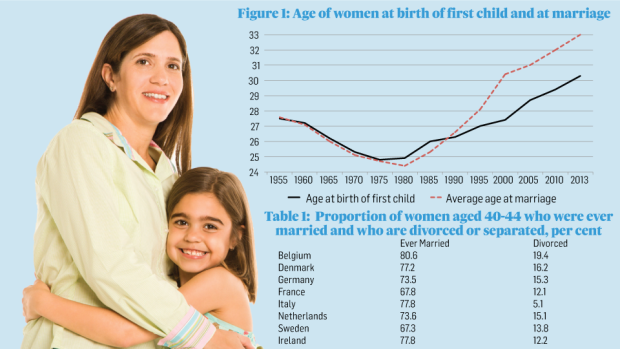 The pill and payments

The proportion of women in their 40s whose civil status is single, at 22 per cent, has risen back virtually to what it was before the second World War. However, being single today is not equivalent to being without a child or a partner. Half of contemporary single women have been married or have had a child.

A significant social change over the past 40 years has been the gradual disconnection between the decision to get married and the decision to have children. Today it is often babies first and then the wedding, rather than the other way around.

In the 1970s, being a single parent generally meant being a lone parent. Today, however, over half of all births outside marriage are to couples who are living together. The clerical fire-and-brimstone of the 1950s was especially focused on sexual transgressions, and cohabitation was considered a matter of grave scandal. Today, living together prior to marriage, or as an alternative to marriage, is the norm.

From the Famine through the first half of the 20th century, marrying late was a way to restrict family size in the absence of contraception and in the face of abundant fertility. Today, the age of marriage is again high, but this time it may owe more to delayed family formation while women establish their careers, and the custom of beginning a family before taking the trip down the aisle.

For those couples who do plan on eventually getting married, the cost and sheer organisation of the celebrations can be another cause for delaying the date.

Closer to the Euro average

Table 1 shows Belgium has a slightly higher share of women never married than ourselves. Denmark and Italy have a similar share to Ireland, and France and Sweden have a somewhat lower share of women who have never been married.

The introduction of divorce in Ireland in the 1990s didn’t open any floodgates, and the numbers who are divorced today remains relatively small. The 2011 census showed that 6.5 per cent of women aged 40-44 were divorced, alongside a further 5.5 per cent who recorded themselves as separated.

When these two groups are combined, as shown in Table 1, Ireland’s rate of marriage breakdown is not dissimilar to many other countries shown.

For 120 years after the Famine, Ireland’s demographic patterns stood out as very unusual. The major changes in marriage and family formation that have evolved over the past 30-40 years, and indeed the arrival of significant immigration since the mid 1990s, have moved Ireland more into the mainstream European demographic pattern.

Our historic patterns of emigration and family size means that Ireland has been, on average, a much younger society than our European neighbours, with a low level of old-age dependency. That is the next area where we will be playing demographic catch-up.

1 How much state pension will I get next year?
2 Am I crazy to consider switching to an Ulster Bank mortgage?
3 PTSB plays down Ulster Bank talk as it sells €1.4bn of loans
4 How long can Government afford to keep State pension age at 66?
5 Brexit to curb services trade with UK, accountants group warns
6 Avolon appoints Paul Geaney as chief risk officer
7 Irish tech company Asavie acquired by Nasdaq-listed Akamai
8 Housing crisis here to stay in absence of big rethink, industry warns
9 Irish start-up Wayflyer raises €7.8m in seed funding
10 Up or down – how much is your Local Property Tax this year?
Real news has value SUBSCRIBE