Jobs: Minimum wage to be increased to €9.15 from January 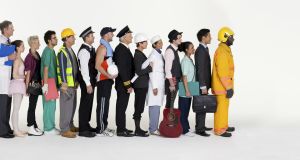 The national minimum wage is to be increased to €9.15 per hour from January, the Minister for Public Expenditure and Reform Brendan Howlin has said.

The Government is also to introduce reforms to PRSI arrangements to address an anomaly which if left unchanged could have seen see workers take home less money following a rise in the national minimum wage.

The employer PRSI threshold is also to be raised to avoid businesses facing higher costs as a result of the minimum wage changes.

The increase in the rate of the national minimum wage from €8.65 per hour to €9.15 per hour was recommended earlier this year by the Low Pay Commission.

The Minister for Business and Employment Ged Nash said a single person on the minimum wage working 39 hours per week would be better off by €708 per year as a result of new measures.

He said the commission would review the minimum wage rate again next year.

He said the Government was committed to making work pay.

The Minister for Finance Michael Noonan said that the PRSI system, as currently structured resulted in a situation where an employee could receive a pay increase but find themselves with less money.

“Following the publication of the report of the Low Pay Commission, the Government committed to taking action to address this step effect in the PRSI system. I am introducing a tapered PRSI credit with a maximum level of €12 per week or €624 in annualised terms to alleviate the step effect across a range of incomes. This change will ensure that low income earners will see a significant improvement in net incomes.”

Mr Nash said the PRSI changed would cost about €24 million.

The Minister for Jobs and Enterprise Richard Bruton said the budget “hit the bullseye for startups, entrepreneurs and jobs as part of the drive towards full employment”.

“A series of tax changes that I have argued for, which will make a real improvement for startups and growing businesses, will be implemented. These include cuts to the universal social charge for middle-income earners, reduced capital gains tax for business and a new best-in-class Knowledge Development Box will encourage more people to start a business and help businesses to create more jobs.”