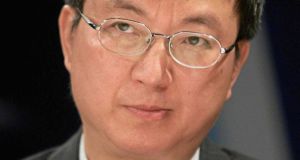 IMF’s deputy managing director Min Zhu said the tools for containing housing booms were “still being developed” but “this should not be an excuse for inaction”. Photograph: Severin Nowacki/World Economic Forum via Getty Images

The world must act to contain the risk of another devastating housing crash, the International Monetary Fund warned yesterday, as it published new data showing house prices are well above their historical average in many countries.

It notes that Irish house prices are still 7 per cent below their long-run average in relation to incomes, but 10 per cent above their long-run average in relation to rents. The warning from the IMF shows how an acceleration in global house prices from already high levels has emerged as one of the major threats to economic stability, with countries making limited progress in keeping them under control.

Min Zhu, the IMF’s deputy managing director, said the tools for containing housing booms were “still being developed” but “this should not be an excuse for inaction”.

House prices “remain well above the historical averages for a majority of countries” in relation to incomes and rents, Mr Zhu said in a speech to the Bundesbank last week, only released yesterday because it clashed with a European Central Bank announcement.

“This is true for instance for Australia, Belgium, Canada, Norway and Sweden,” he said.

In the wake of the recession, central bankers have cut interest rates to record lows, pushing house prices to a level the IMF regards as a significant risk to economies as diverse as Hong Kong and Israel. In Canada house prices are 33 per cent above their long-run average in relation to incomes and 87 per cent above their long-run average compared with rents.The figures for the UK are 27 per cent relative to incomes and 38 per cent rents.

Mr Zhu said the tools for controlling prices were new, but countries must use them. Options include limits on mortgage lending relative to values and incomes; higher capital requirements for banks making risky loans; and stamp duties to damp foreign demand.– (Copyright The Financial Times Limited 2014)