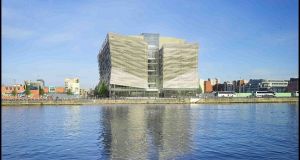 The Central Bank predicts the economy will deliver an additional 90,000 new jobs by the end of next year while unemployment will fall to a 10-year low of 5.6 per cent

Outside of construction, employment in Ireland is now higher than its pre-crisis peak, according to the Central Bank.

In its latest quarterly bulletin, the bank said the number of people employed in non-construction activities here had risen to 1.92 million, which surpassed the level achieved in 2008 just prior to the crash.

While exports drove the initial phase of recovery, the bank said strong employment growth has been the defining feature of the recent turnaround.

On the basis of current trends, it predicted that an additional 90,000 new jobs would be created this year and next as the economy converged on full employment.

The bank also noted there was an ongoing surplus of jobs in the finance and IT sectors, where wages were growing by an average of 4 per cent per annum.

While employment in construction is growing strongly, the total number of workers employed in the sector was 150,000, which is barely half of where it was during the boom.

In its report, the bank predicted headline unemployment would average 6.2 per cent this year before falling to 5.6 per cent next year, and close to 5 per cent by the end of 2018.

At this level of unemployment, there was a risk of overheating, the Central Bank’s Gabriel Fagan, in his final outing as the bank’s chief economist, warned.

“However, at this point in time, and taking into account the next year horizon, we’re not at a point where we can say the labour market is overheating,” he said.

Dr Fagan also noted that the historical relationship between employment and wage growth had been fractured since the crash, with high levels of employment not exerting the same pressure on wages as it has done in the past.

In its report, the Central Bank upgraded its growth forecasts for the economy, citing strong growth in full-time employment, incomes and consumer spending.

The bank said it now expected the economy to grow by 4.9 per cent in gross domestic product (GDP) terms this year, up from a previous estimate of 4.5 per cent, and by 3.9 per cent next year.

Despite the positive projections, the bank said external uncertainty in the form of Brexit, volatile exchange rates and possible changes to the global trading environment continued to pose serious risks.

“The impact of Brexit to date has been fairly muted and mainly felt through the effects of a weaker pound,” Dr Fagan said.

“Far from dampening consumer sentiment, Brexit is keeping the costs of many imported goods down. Although this is good news for many Irish consumers, we must not underestimate the threat that Brexit poses to our longer-term prosperity given our exposure to the UK economy,” he said.

To monitor the likely impacts of Brexit on the Irish economy, the Central Bank has established an internal Brexit taskforce, which will assess the effects of UK’s departure from the EU on individual sectors on a quarterly basis.

In its report, the Central Bank also revised down the likely level of house completions it was predicting for this year to 18,000 units and to 21,000 for 2018, noting the numbers were subject to a high degree of uncertainty.