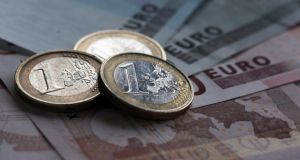 The Irish economy unexpectedly shrank last year on the back of a sharp fall-off in net exports linked to the so-called pharma patent cliff.

Preliminary figures from the Central Statistics Office (CSO) showed gross domestic product (GDP) contracted by 2.3 per cent in the fourth quarter and by 0.3 per cent for the year as a whole.

Published on the same day as the State’s first full return to the bond markets, the figures represent something of a setback for the Government’s recovery plans and reflect the volatile nature of Ireland’s post-bailout economy.

The Department of Finance had predicted GDP growth of 0.2 per cent for 2013 on the back of a surge in employment growth which saw the creation of 60,000 new jobs.

Gross national product (GNP), which screens out the effects of multinational operations, however, increased by 3.4 per cent last year and by 0.2 per cent in the final quarter.

Several analysts said the distorting effects of the multinational profit flows meant GNP provided a more accurate reading of the health of the economy.

Today’s figures indicated import growth out-stripped exports during 2013, a reversal in the trend of recent years, resulting in a €1.02 billion decline in net exports.

The main component of this was a 3.3 per cent decline in industrial output linked to the expiry of several high-profile patents in the pharma sector and a fall-off in the value of the country’s software exports.

Parts of the economy that did expand last year included the construction industry, which grew by 10.6 per cent, while the agriculture sector expanded by 6.9 per cent.

Despite the pick-up in employment in the latter half of the year, personal consumption, which accounts for two thirds of domestic demand, fell 1.1 per cent.

“By contrast, labour market conditions are encouraging. Employment data is a reliable indicator of underlying developments in the economy and figures released a fortnight ago show employment growth of 3.3 per cent year-on-year in the fourth quarter of 2013.”

However, Sinn Féin’s finance spokesman Pearse Doherty said that while the growth in GNP was to be welcomed, the failure of the Government to deliver growth in GDP was a “real concern” for future economic prospects.

Merrion economist Alan McQuaid said: “We wouldn’t read too much into the GDP data. In our view they are understating the true health of the economy at this juncture given the huge improvement we’ve seen in employment in the past year, with GNP a better barometer.”

Ibec chief economist Fergal O’Brien said it was a bit of a “puzzle” that the GDP numbers are so disappointing at a time when economic recovery was “clearly” taking hold.

“The Q4 data doesn’t fit with either the 60,000 jobs growth number last year, or the strong improvement in business and consumer confidence,” he said.

Conall Mac Coille, chief economist at Davy Stockbrokers said that while the patent cliff has hurt exports, it will have a relatively small effect on jobs.

“The narrative of Ireland’s slow economic recovery from the crisis is still on track,” he said.

Today’s growth figures come on the back of a spate of positive recent data relating to the economy, that showed unemployment had fallen below the euro zone average to 11.9 per cent, house prices were rising and consumer sentiment was near a seven-year high.