GDP is expected to have grown by 4.3 % last year but is forecast to decelerate 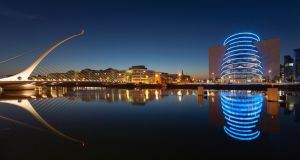 The commission said that after a mixed picture in the first half of 2016, Ireland’s economy performed better in the third quarter with core domestic demand up by 3.4 per cent on the year

The European Commission has raised its forecast for growth in the Irish economy. This comes as it says growth across the euro zone will be slower than previously projected.

The Irish economy is expected to remain firm this year with GDP growth of 3.4 per cent expected by the Commission

In a new forecast in which it predicts euro zone economic growth will lose some speed in 2017 before rebounding next year, the commission says domestic demand will remain the key driver of the Irish economy with additional support coming from an improving labour market.

The commission warned that economic risks have heightened in recent months for Ireland with uncertainties related to Brexit and future US tax and trade policies.

It said that after a mixed picture in the first half of 2016, Ireland’s economy performed better in the third quarter with core domestic demand up by 3.4 per cent on the year.

GDP is expected to have grown 4.3 per cent last year but is forecast to decelerate over the coming years.

At the same time, the commission predicts growth in the 19 countries sharing the euro will slow to 1.6 per cent this year from 1.7 per cent in 2016. However, it is expected to bounce back in 2018 when it is expected to increase by 1.8 per cent.

Britain's GDP growth meanwhile, is forecast to decline from 2 per cent in 2016 to 1.5 per cent this year, and to further slow down to 1.2 per cent in 2017 as Brexit begins to impact.

According to the latest forecast, general government deficit is estimated to have fallen to 0.9 per cent last year with Ireland’s debt-to-GDP ratio expected to continue to decline gradually over the coming years, but risks to the fiscal outlook remain.

Public finances are expected to improve gradually with tax receipts up 5 per cent last year on the back of the strong performance of corporate tax and excise duties.

Investment activity is projected to remain firm, with investment - excluding the impact of aircraft and R&D spend - increasing by 5 per cent year-on-year in the third quarter.

Unemployment is forecast to fall to 7.2 per cent next year with predicted “moderate” employment growth.”

Net exports are expected to contribute positively to GDP growth in 2016 as consumer prices fell 0.2 per cent.