January retail sales down by 1.7% 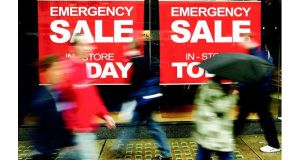 Figures from the Central Statistics Office (CSO) show the volume of retail sales fell by 1.7 per cent in January compared with the previous month.

Figures from the Central Statistics Office (CSO) show the volume of retail sales fell by 1.7 per cent in January compared with the previous month.

The figures also indicated sales declined by 1.2 per cent on an annual basis in January, the second largest fall in six months.

When motor sales are excluded, the volume of retail sales fell by 1.3 per cent in January compared with the previous month but rose by 0.7 per cent on an annual basis.

Department stores saw sales plummet by more than 15 per cent during the month, while bar sales fell 8.1 per cent with motor sales down by 3.6 per cent.

The CSO noted that car sales were down 23.1 per cent in January on an annual basis.

Total retail sales have now fallen by more than 25 per cent since the start of the recession.

The sector which showed the biggest monthly increase was furniture and lighting which saw sales rise 6.6 per cent.

The latest figures showed the value of retail sales fell by 1.7 per cent in January when compared with the previous month and there was an annual decrease of 1.0 per cent.

If motor trades are excluded, there was a decrease in the value of retail sales in January of 0.5 per cent and an annual increase of 0.9 per cent.

However, she said six of the 13 CSO retail categories were showing annual increases in the volume of sales, with electrical goods and department stores “leading the way”.

Retail Ireland, the Ibec group that represents the retail sector, said when motor trades were excluded, the annual figures were positive but that the sector was “a long way from a sustained recovery”.

Director Stephen Lynam said: “There was a sharp retraction in sales in the first quarter of last year, after initial hope that the worst was over.”

“To ensure this is not repeated, it is vital that Government take steps to boost consumer confidence and reduce retailer costs.”

But Mark Fielding of Isme, which represents small and medium-sized businesses, criticised the “lack of vision and ambition” for the retail sector contained in the Government’s recent action plan for jobs.

“It is obvious that little or no thought has been put into addressing the retail problem in the current plan.”

He said the sector needed a fully represented retail strategy group, “rather than the milk and watery inter-departmental group proposed in the plan”.

David Fitzsimons of Retail Excellence Ireland, said: “It is disappointing to see that the volume and value of retail sales in Ireland continue to decline in 2013, despite December recording like for like gains.”

“Over the past few weeks, we have seen businesses fail and many jobs lost, the sector still remains very fragile and this Government needs to tackle this before we see further failure in the coming months,” Mr Fitzsimons said.