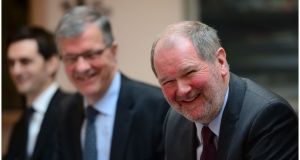 NTMA chief executive John Corrigan (right) speaks to the media at a briefing in the Treasury Building in Dublin. Photograph: Bryan O’Brien/Irish Times

Ireland took a major step towards exiting its bailout programme today by selling €5 billion worth of 10-year bonds.

The National Treasury Management Agency ’s auction was seen as a major test of Ireland’s ability to raise long-term funds from capital markets.

The issuance, which matures in March 2023, was double the size that many analysts had forecast. It is understood the agency was guiding that it would issue €2 billion to €3 billion but had offers of up to €12 billion.

It was the first issuance of 10-year notes since the country entered its EU-IMF bailout in late 2010.

Traders said the new debt would yield around 4.15 per cent, compared to a yield of 3.7 per cent on Ireland's current benchmark 2020 bond.

At the height of euro financial crisis two year ago, the yield on Ireland’s 2020 bond climbed to over 15 per cent.

"This shows Ireland has firmly returned to the market," said a trader who took part in the auction. "It sends an important signal."

Today’s auction is likely to have a significant impact on the country’s credit rating.

"This represents an important milestone in the country's re-engagement with the bond market," said economist with NCB stockbrokers Philip O'Sullivan said.

The NTMA has set itself a target of raising €10 billion this year to help fund the country’s day-to-day spending.

The agency had already raised €2.5 billion of the target with the issuance of five-year notes in January.

Yields on Ireland's current benchmark 2020 bond fell further last week after European Union finance ministers agreed to look at how to extend the maturity of emergency loans Ireland and Portugal have received under their bailouts.