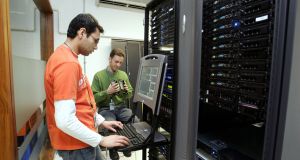 Security software firm Symantec is to establish a European customer support base alongside its existing facility in Blanchardstown which will create 400 new jobs.

The company, which produces a range of content and network security software, said the new centre would provide a Europe-wide sales and support function to its customers.

Symantec said it would be seeking highly skilled, multilingual staff to fill the roles.

The company’s Dublin base, which was established in 1991, employs just over 600 people and houses Symantec’s global security operations centre, as well as operations in business authentication, software development and testing.

The company’s new European customer management centre will be located alongside these existing functions, the company said today.

The expansion is supported by the Department of Jobs, Enterprise, and Innovation through IDA Ireland.

Taoiseach Enda Kenny said: “Symantec’s establishment of its European Customer Management Centre in Dublin is a signal of its continuing commitment to Ireland and contribution to our economic recovery.”

Minister for Jobs, Enterprise, and Innovation, Richard Bruton said: “This announcement by Symantec, that it is to expand its operations and create 400 new high quality jobs, is a fantastic example of our ambition to grow the ICT sector which has already seen substantial employment growth since we took office.”

Symantec’s Matthew Ellard said: “These new jobs offer the opportunity for talented and driven individuals to join a high-performing company, which is focused on enabling its employees to develop their skills and enhance their career.”