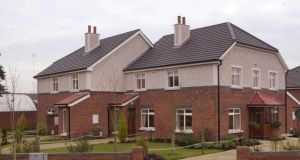 Data from the CSO show that house prices fell 1.1 per cent in the year to May. Graphic: The Irish Times 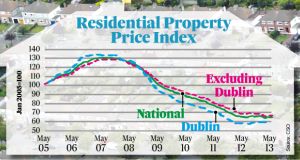 Data from the CSO show that house prices fell 1.1 per cent in the year to May. Graphic: The Irish Times

The collapse in residential property prices appears to be levelling off, figures from the Central Statistics Office show.

Property prices across the State fell 1.1 per cent in the year to May, but the general rate of price decline is slowing. The CSO reported a fall of 1.2 per cent in the 12 months to April this year, but this compares to decline of 15.3 per cent recorded between May 2011 and May 2012.

The annual index is calculated as a simple average of the published CSO indices for March, June September and December of each year with a base year of 2005.

Taking the 2005 average as 100, residential property prices rose to a high of 130.5 in September 2007 before slipping downwards for the next 12 months to a figure of 120.1. Price falls accelerated thereafter, hitting a low of 64.1 in March of this year. Price indices generally are now showing small gains.

In Dublin specifically, residential property prices grew by 0.5 per cent in May and were 1.4 cent higher than a year ago. House prices in the Dublin area grew 0.5 per cent in the month and were 1.3 per cent higher compared to a year earlier. Apartment prices in the capital were 1.2 per cent lower when compared with the same month of 2012. However this figure is calculated on a relatively small sample size and could reflect volatility because of this.

Residential properties in the rest of the State (i.e. excluding Dublin) grew by 0.1 per cent in May, the same as in May last year.

Despite the signs of a modest price recovery, the Dublin market has shown steep declines since the 2007 peak – the most striking price falls anywhere in the Republic. House prices in the city are now on average 55 per cent cheaper whereas apartments are some 61 per cent lower, the CSO reports.

The trend is also matched in the North.

House prices in Northern Ireland have shown a 2.1 per cent drop - the largest decline anywhere in the UK, figures released by the Nationwide building society show. Average Northern residential property prices have fallen 53 per cent since their 2007 peak.

The fall in prices north of the Border is in marked contrast to the overall trend in Britain where an annual increase of 1.9 per cent is the largest year-on-year jump in prices since 2010. The Nationwide reports that the average monthly rise in prices is currently 0.3 per cent, down from 0.4 per cent in May.