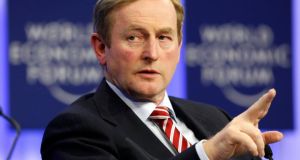 Taoiseach Enda Kenny gestures during a session at the annual meeting of the World Economic Forum (WEF) in Davos on Thursday. Photograph: Reuters

In an interview with The Irish Times, Dr Weidmann said the Bundesbank did not share the concerns of then ECB president Jean-Claude Trichet that debt write-downs of investors posed too great a stability risk for the currency union.

“In that debate the Bundesbank has always considered it important to make investors bear the risks of their investment decisions,” said Dr Weidmann. “And already then [it] favoured contributions of investors in the event of solvency problems, especially for banks that are to be wound down.”

The Bundesbank says it was “all but alone” in supporting Ireland against Mr Trichet, but that the majority of the ECB governing council backed Mr Trichet. In negotiations with former minister for finance Brian Lenihan, and in subsequent letters late in 2010, Mr Trichet closed the door to burden-sharing with investors.

Mr Trichet wrote that “any additional capital requirements” for restructuring Anglo Irish Bank and other Irish institutions requiring assistance “must be covered with cash injections by the government”.

Debt-sharing
For the Bundesbank, however, the principle of debt-sharing being requested by Ireland was one that should have been maintained despite the extraordinary financial circumstances of the time. Despite its backing for Ireland in 2010, the Bundesbank was critical of last year’s ECB deal to replace promissory notes to support the defunct Anglo with long-term bonds.

Dr Weidmann said the agreement was a “dangerous blurring of monetary and fiscal policy” that “risks being perceived as monetary financing” – forbidden by the ECB rule book.

“This would bring central banks into a situation where monetary stability is dominated by fiscal policy,” he said.

A year on, Dr Weidmann suggested that the highly technical arrangement, which drew little attention in Germany and elsewhere in the euro area, might be considered “a kind of a compensation for the Irish support to its banking system”.

But he made clear that no more movement is likely on the central bank side, while, at political level, recent European agreements suggest that “legacy bank debt remains a primarily national responsibility”.

“I assume that Ireland, now out of the programme, will be able to meet its commitments without any external assistance,” he said. “I don’t think it is in Ireland’s interest now to raise doubts about its readiness to service its debt.”