Burton’s stance on child benefit is not evidence-based

Policy making on the hoof is almost always a bad idea 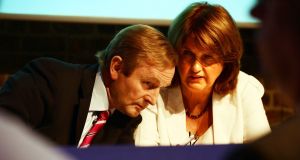 Today, we were told that further cuts or reforms to child benefit are unlikely, mostly because, apparently, middle income earners, struggling with debts, are using the payments to service their mortgages. Is this a valid concern? Nothing, it seems to me, makes a better case for child benefit reform than this new nutty policy.

Policy making on the hoof is almost always a bad idea. First, let’s think about the evidence base. Is there one? TDs and Senators are relaying back to Joan Burton instances of families paying their mortgages with child benefit. No doubt, these stories are real and do reveal examples of acute hardship. But these, by their very nature, are anecdotes. Policy should be based on accumulated evidence, not stories that may or may not be true, that may or may not be revealing of the true picture.

Did the original designers of child benefit intend the cash to be used for debt servicing? Certainly not. Thoughtful welfare policies target payments where the need is greatest, where the recipients obviously need specific help. Well-targeted policies are, it should be obvious, key to proper welfare spending.

It is undoubtedly the case that many people are struggling with mortgages. But not every family is. Many homes do not have mortgages at all, not all families with children are behind on their payments. If their is a rationale for child benefit, it is certainly not to help people with their negotiations with their bank manager.

But people who are behind on their mortgage do need help. It is an awful situation for the individual family. And the scale of the personal debt problem is posing a severe headwind for the economy as a whole. Our inability to deal with this problem is one of the key reasons why the domestic economy remains mired in stagnation.

We still don’t know the scale of the problem. There is still a huge debate over the amount of genuine distress and ‘strategic defaulters’. The suspicion that some cute individuals are holding back on mortgage repayments, confident of some nebulous deal over debt forgiveness, has slowed down attempts to grapple with the problem. We need to move beyond these concerns, we need to get over them.

The banking system is significantly hobbled by all of this. Mostly because nobody knows the size of the bad debt problem, because nobody has tried to get to grips with it, bank shares are still essentially penny stocks that we don’t know how to value properly. It goes without saying that a broken banking system is a massive impediment to any normalisation of the domestic economy.

The personal debt situation is being dealt with, after a fashion. It’s been put on the long finger with policy makers hoping that slow reform of insolvency legislation will combine with the passage of time to make things better in the end. And occasionally yell at the banks to do something. We now have ‘no reform to child benefit’ proposed as part of the solution. Something, it is clearly hoped, will turn up, preferably the economy and jobs growth.

One very obvious problem with all of this is that it mostly involves burying our heads in the sand. The other is that if and when the economy does make a turn for the better, mortgage interest rates will normalise - go up. If we haven’t made significant progress with resolving excess debt, higher interest rates are going to lead to a whole new set of problems.

Deal with the personal debt problem properly. Targeting child benefit on mortgage repayments is the worst idea that we could possibly imagine.