Ireland sent €86.9bn worth of goods overseas last year, but where did they end up? 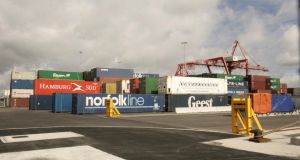 Irish exporters shipped €86.9 billion worth of goods to more than 200 countries and territories last year. They sold snails to France, guns to Cyprus, pig fat to China and false teeth to Kuwait.

A sharp fall in chemical and pharmaceutical output is the most notable development in detailed external goods trade data obtained from the Central Statistics Office.

The total value of Irish goods exports fell by 5 per cent (€4.8 billion), as the impact of blockbuster drugs produced in the State coming off-patent showed.

Despite the fall-off in chemical exports, the US increased its status as the State’s largest goods export market, growing by almost 1.3 per cent to some €18.4 billion.

The US, where some blockbuster drugs came off patent earlier, was one of the few growth markets for chemicals and related products (up €127 million to €12.8 billion), which accounted for more than two-thirds of total exports.

Britain (€12.5 billion) was the second largest market, with sharp drops in chemicals (down €960 million) and fuel (down €464 million) the main drivers in an 8.6 per cent goods trade decrease.


Food and livestock up
More than one-third of the €8.7 billion of food and livestock exported from Ireland last year went to Britain, with the category rising by €181 million to €3.45 billion. Beef , both fresh and frozen, accounted for some 20 per cent of the total.

Exports to the Bric (Brazil, Russia, India and China) economies amounted to some €2.58 billion last year, and increased in three of the four countries.

Trade with China, the largest market of the four, fell by 9.4 per cent to €1.4 billion, with falls in machinery and transport equipment (down €238 million) and chemicals (down €113 million) being partly offset by food and livestock exports (up €112 million). 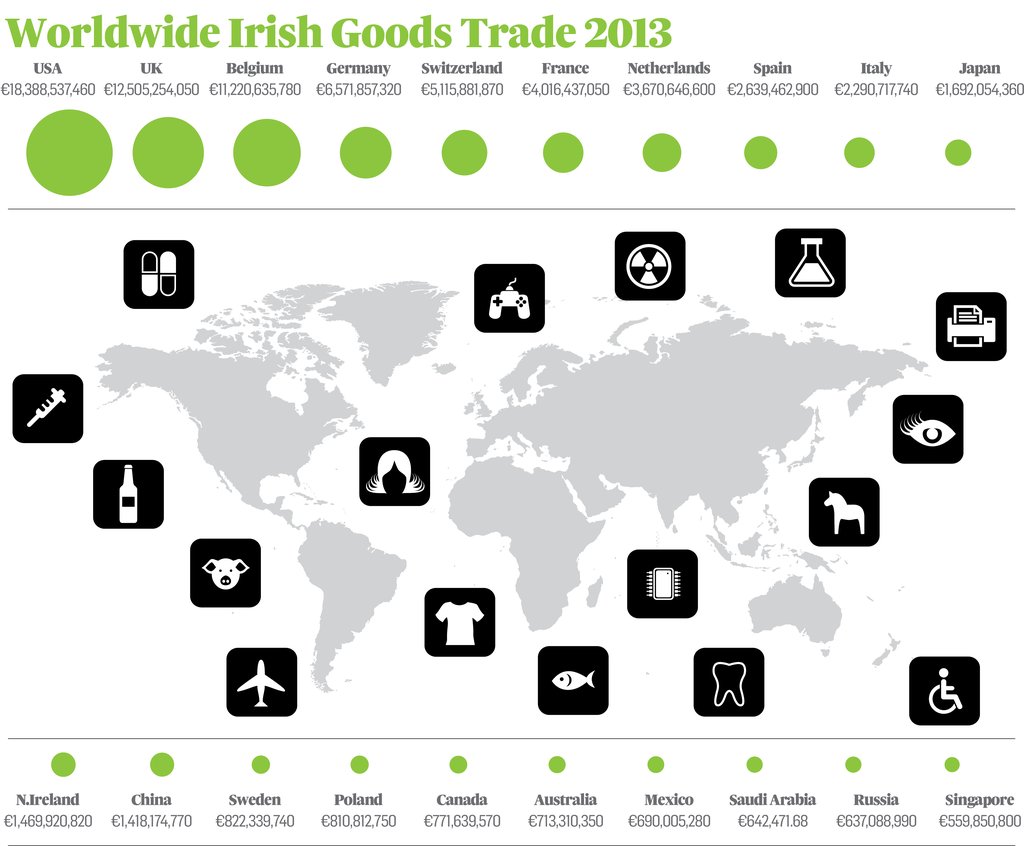 
Nigerian market
Nigeria continues to be the State’s largest goods export market in Africa, with trade up 6 per cent to €323.3 million last year. This included €115.5 million of goods under the heading essential oils, perfumes and flavour materials, as well as €40 million of fish and €35 million of milk and cream.

Exports to Israel fell 12.3 per cent to €457.8 million, with electronic circuits (processors and controllers) accounting for €262.2 million of the total. Trade with Palestine fell 32 per cent to €224,000, the vast majority of which was in medical products such as vaccines.


Horse meat
The presence of horse in meat products made the headlines last year. Figures show the State exported €5.7 million of meat from horses, donkeys, mules and hinnies, with France (€2.3 million) and Belgium (€2.1 million) the main buyers.

The figures show Irish whiskey exports were €317 million last year, with the US by far the largest market (€147 million), followed by Latvia (€30 million), while others such as Surinam, Curacao and Uganda are also developing a taste.

Worn clothing worth €16.1 million was dispatched, with demand in the western African state of Benin (€3.5 million) second only to that in Britain (€4 million). On the less glamorous side, €27.8 million of animal guts, bladders and stomachs were exported to Britain (€8.4 million), the Netherlands (€4.7 million) and Germany (€2.8 million). China (at €3.3 million) accounted for almost two-thirds of pig fat exports and Chile bought the vast majority of the €87,000 of bovine semen exported.

Irish firms exported €322,000 of firearms, largely to Britain and Northern Ireland, but also to Cyprus, Italy and Malta, while Hong Kong took €1,000 of armoured vehicle or tank parts.


Radioactive materials
The data shows about €260,000 of radioactive and associated materials were exported, with Norway, Brazil and Finland the main takers. Japan purchased almost half of the €896 million of contact lenses exported.

Of the €546 million of artificial body parts exported from Ireland, the US bought €184 million, Belgium €140 million and Germany €59 million. Irish firms shipped artificial teeth and dental fittings worth €1 million to countries such as Kuwait (€129,000) and Spain (€91,000), which also bought almost half of the wigs, false beards, eyebrows and eyelashes exported at a cost of €42,000.

Radio communications systems provider Sigma Wireless found ample opportunity in the Irish market after it evolved from Motorola Ireland in 1991.

When the recession hit and Ireland moved out of “growth mode”, Boyle decided it was time to look further afield, so he asked his contacts where opportunities might present.

“The mature markets were fairly well supported but the developing markets, we found, had more opportunities available but more challenges, as you can imagine,” he says.

“The unique offering that we have is to be able to look at and design a system so it suits that customer’s requirement and then roll it out and install it and in some cases actually support it.”

Sigma decided to pursue an opening to provide a radio system to a huge iron ore mining project that was starting in an isolated part of Sierra Leone. “When we arrived there was literally nothing, it was just barren,” Boyle recalls.

The company built a radio system linking some 6,000 employees across the mine, a port and a new 250km railway line connecting the two.

Some parts of the system, made at Sigma’s base in Finglas, Dublin, were so large that airlines flying to Sierra Leone couldn’t carry them.

“We flew them to Nigeria and I think they had to go across six country borders to get there. That took a long time and was a massive challenge,” Boyle says, adding that the staff who travelled to roll out the system faced conditions that were far from five-star.

The project ultimately worked out and Sigma is now seeking further opportunities in Africa, with radio systems for Botswana’s police force and a gas refinery project in Angola among the projects in the pipeline.