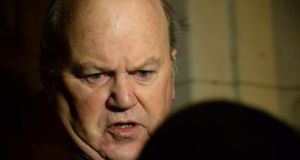 Relations between Dublin and Brussels are at a very low ebb after a confrontation in the Department of Finance a fortnight ago over the new water scheme.

At issue upfront is the Government’s acute displeasure at questions publicly raised by a source close to the European Commission about the fraught decision to charge a flat rate for water.

However, the dispute reflects deeper tensions with the EU authorities. While the exchanges over water came as troika officials carried out a second post-bailout inspection of Ireland’s affairs, Dublin and Brussels have also been at loggerheads over fiscal policy and corporate tax.

The pretext is clear. The Government executed a huge about-turn on Wednesday, November 19th, when it cut the water rate and postponed metered charging. This was sensitive politically given the force of protests against the charge, the Government’s loss of support and its failure to capitalise on income tax cuts in the October budget.

A crucial consideration was to ensure the debts of Irish Water would remain off the State’s balance sheet.

Both the annual budget deficit and the national debt would increase if these liabilities remained on balance sheet, necessitating further retrenchment. The Government insists Irish Water will go off balance sheet but the decision is in the gift of Eurostat, the commission’s statistics arm, and it will not make a ruling until April.

The source said there was surprise at the move to suspend metered charging, and questioned the merits of a flat charge. The source also said Eurostat never issued provisional guidance to any member on its likely treatment of any initiative.

There was an angry response at the highest level within the Coalition after stories duly appeared, including the front-page lead item in The Irish Times on Friday, November 21st.

High-level Government officials spoke first thing that morning, after which visiting figures from the commission were called to Merrion Street for an unscheduled meeting at 9am.

Quite what transpired remains unclear. By all accounts, however, a severe rebuke was delivered by a high-level Department of Public Expenditure official over the intervention by the source close to the commission. The exchange has been described as “difficult” and “tense”.

At one point a commission official is said to have declared that he did not like the “attitude” on the Irish side. His concerns were immediately dismissed. The European official was told – in uncompromisingly direct language – that there would be no change whatever in attitude or tone.

According to an informed source, a meeting scheduled that day between troika inspectors and secretaries general of Government departments was cancelled.

Pointedly, however, the commission and the ECB said Ireland should intensify efforts to reduce the budget deficit leading up to the next election and beyond.

This, too, went down very badly in Irish political circles. A Minister said such demands were “difficult to comprehend” given the advancing recovery of the Irish economy.

The following week, Minister for Finance Michael Noonan wrote to EU economic affairs commissioner Pierre Moscovici to say the remarks attributed to the source close to the commission were “entirely unhelpful”.

It is not known whether Moscovici’s response has been received in Dublin, but he is considered likely to defend the commission’s right to intervene in this way.

Among many Irish concerns is the question as to whether the commission was seeking to become a protagonist in domestic debate.

At a time when the French government was insisting on its right to breach EU budget guidelines, the point was made that Ireland had met all targets. One year has passed since the Government reclaimed Irish sovereignty at the end of the bailout.

With external oversight strengthened in the wake of the crash, the battles to assert that sovereignty continue.

1 Google completes purchase of Treasury Building for €120m
2 Garda mobile contract win causes concern over Eir’s use of Huawei kit
3 Varadkar resigns amid warning impasse will hit the economy
4 Billionaire Zara founder and German funds vie for prime Dublin offices
5 Appeals board grants planning for 354 Greystones homes
6 High time: Netherlands moves to clean up absurd cannabis policy
7 Exposed to coronavirus: How Irish business is coping with fallout
8 Why Sweden ditched its negative rate experiment
9 A maverick taking on the Irish whiskey establishment
10 How to . . . move (almost) everything to your new phone
Real news has value SUBSCRIBE