Ireland improves to 17 out of 175 countries on corruption index 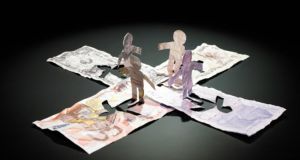 Money makes the world go round: Transparency International’s Corruption Perceptions Index 2014 shows that Denmark is the least corrupt country in the world

Ireland is now ranked number 17 out of 175 countries on the annual corruption index published by Transparency International, up from a ranking of 21 last year.

It shares 17th place with Barbados, Hong Kong and the US. Denmark was ranked in 1st place in the index with a score of 92, followed by New Zealand, Finland and Sweden with Norway and Switzerland sharing 5th place. North Korea and Somalia share last place, scoring just eight.

In 2012 Ireland was positioned in 25th place on in the index, in the wake of the publication of the Moriarty and Mahon Tribunal reports.

‘The improvement may be explained by few ‘big-ticket’ corruption stories over the past couple of years. The tribunals may also be fading from memory but there are still significant corruption risks to be addressed’, said John Devitt.

The Corruption Perceptions Index is based on expert opinions of public sector corruption. Countries’ scores can be helped by open government where the public can hold leaders to account, while a poor score is a sign of prevalent bribery, lack of punishment for corruption and public institutions that don’t respond to citizens’ needs.

In the 20th edition of the index, scores for China (with a score of 36 out of 100), Turkey (45) and Angola (19) were among the biggest fallers with a drop of 4 or 5 points, despite average economic growth of more than 4 per cent over the last four years. The biggest improvers over the last year, according to the index were Côte d´Ivoire, Egypt, Saint Vincent and the Grenadines (+5), Afghanistan, Jordan, Mali and Swaziland (+4).

“Corrupt officials smuggle ill-gotten assets into safe havens through offshore companies with absolute impunity,” Mr Ugaz added. “Countries at the bottom need to adopt radical anti-corruption measures in favour of their people. Countries at the top of the index should make sure they don’t export corrupt practices to underdeveloped countries.”