IMF role in Ireland’s crash ‘a drama in two acts’

Cantillon: Donovan spells out the IMF support for the burning of senior bondholders 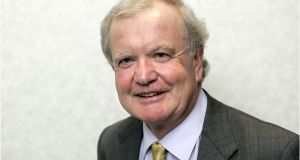 Donal Donovan: is critical of the IMF’s role in economic surveillance in the run-up to the crash

The IMF was flinging out reports on Ireland and its banks this week, but lost a little in the rush was an assessment by former IMF staffer Donal Donovan of the institution’s role in Ireland in the run-up to and after the economic crash. It was, as he said, “a drama in two acts”.

Donovan is critical of the IMF’s role in economic surveillance in the run-up to the crash when, in common with most other forecasters, it missed the boat in terms of identifying the inflating economic bubble. Some staffers told Donovan that it was “difficult to imagine” that an ostensibly successful economy such as Ireland’s was heading for the rocks. As we saw this week in its comments on Ireland, the IMF is unlikely to be behind the door in any negative assessments or highlighting of risk in future, even in the context of an overall positive assessment.

The second part of the economic act, the role of the IMF in the rescue and clean-up, has been even more controversial.

“According to reports published later,” Donovan writes, “this position followed a teleconference [in which the Irish authorities did not participate] that included G7 finance ministers, the IMF managing director and the president of the ECB.” We can assume that as Donovan mentions this the “reports” he refers to were correct.

Donovan praises the role of the IMF in the bailout programme generally, saying its technical expertise and experience of previous programmes was invaluable. Senior Irish sources have said much the same.

The IMF was also right that the senior bondholders should have been burnt, or at least singed, and that more could have been done to improve Ireland’s debt position. The fact that we emerged in one piece from the bailout was despite this rather than because of it.