‘If we go back to the drachma, it will be a disaster’ 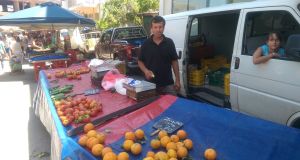 The farmers market in Corinth, a city about an hour from Athens. One seller gave away five chickens to elderly customers who said they couldn’t pay him. “So that’s another €40 that I won’t see anytime soon,” he said. Photograph: Damian Mac Con Uladh

The amount of produce left on her stall by midday meant it was easy to understand why Piga Siachra wasn’t happy after a bad day’s trade at a farmers market in Corinth, a city about an hour from Athens.

“Today was terrible. Sales are down 50 per cent on last week alone. We saw all our usual customers but everyone is buying less,” said Siachra, a woman in her 70s who, as a widow, dresses in black as tradition in rural Greece.

Soon, she and Periklis Roukis, a neighbour who has been helping out in recent months, would have to pack up the honey melon, long and round courgettes, bunches of untopped carrots, herbs and various other vegetables – all certified organic – and return home.

Like many vegetable and fruit producers in Greece, Siachra sells directly to consumers at the laiki, or farmers markets, which can be found in every Greek city and town. In Athens, every district has at least one laiki a week. Corinth has two: on Wednesday in a suburb and a larger one on Saturday in the centre of town.

For many Greeks, the laiki is the modern agora or marketplace, where they can see every week the effects of supply and demand and how political factors can influence prices.

Today’s laiki coincides with the 10th day of capital controls. With Greek cardholders limited to withdrawing €60 a day from ATMs and pensioners restricted to a one-off withdrawal limit of €120, there’s not as much money going round as usual. Not knowing what tomorrow will bring, people are sticking to the essentials – and less of them.

As a customer arrives to buy some tomatoes, the talk quickly turns to the big question on everyone’s lips – whether the country could end up reverting to its old currency if the government cannot secure a deal with its creditors.

“If we go back to the drachma, it will be a disaster,” Siachra says.

The customer, an elderly woman, tends to agree. “We had it good under the drachma, but now that we’re in the euro it’s hard to go back. And all the educated people, the experts, are telling us that things would be worse under the drachma, so you have to believe them,” she said.

On the other side of the road, Dimitris Papafilis, who sells whole, fresh chicken raised on his own farm, argues that a return to the drachma would suit him personally as it would make his produce more competitive.

He sells his poultry for €4 a kilo, about double the price for chicken in certain discount supermarkets.

“But my chicken is far superior. I slaughter after 85 days, whereas the stuff in the supermarkets is only 35 days old and raised in terrible conditions.”

While he said he hold the same number of chickens this week, his profit margin was down due to a jump in the cost of feed.

“Last Monday when I went to buy feed – imported soya, corn and oil – at the mill, they told us that they were closing in two hours due to the capital controls. That created panic and I ended up buying the soya for €40 more per tonne and the corn at €10 more per tonne than usual. There was a €170 difference in just two weeks. The mill never closed in the end. They said that deliberately to up the price, which I had to pay in cash for the first time ever,” says Papafilis.

As he takes three chickens out of his refrigerated van to cut up for a customer, Papafilis explains that he gave away five chickens to elderly customers who said they couldn’t pay him.

“So that’s another €40 that I won’t see anytime soon,” Papafilis says.

As they packed up after a sluggish day, Yiannis and Dimitra Kastaniotis say sales were low.

“Normally we could expect to sell peaches at €1.50 a kilo, but today we ended up almost giving them away at 70 cents a kilo,” Yiannis says, as loaded full crates of potatoes on to his black pickup truck.

His wife says she doesn’t care what currency Greece has as long as there’s money circulating in the laiki, the real market.

“We just need some turnover when we come to the laiki. How am I supposed to know which currency is better? The clever people in our society are supposed to know. All we want to know is whether we’ll have enough to eat tomorrow and to be able to put petrol in the truck,” she says.

At the next stall, Fotini says her takings won’t even cover the cost of petrol at today’s market. She drove about 80km to sell her produce, which included seasonal vegetables and the region’s famed currants – a word derived from Corinth – which over a century ago made and broke the Greek economy.

Despite her low takings, she feels she and Greece will survive, no matter what.