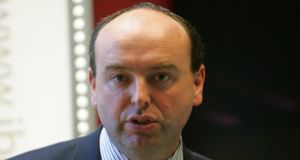 Ibec’s Fregal O’Brien said the Government needs to implement “nothing like” an adjustment of €2 billion. Photograph: Eric Luke /Irish Times

The chief economist of the employers’ lobby, Ibec, has urged the Government to ignore the OECD’s advice that Ireland should stick to its adjustment targets, advising it instead to limit the impact of austerity in the next budget.

Fergal O’Brien, who was speaking in Dublin this morning at a conference organised by the Ibec group Retail Ireland, said the Government needs to implement “nothing like” an adjustment of €2 billion.

“They could halve that target and still hit their targets,” said Mr O’Brien, who said a lessening of austerity could spark a resurgence in consumer spending.

Mr O’Brien said any income tax cuts should be focused on removing middle-income earners from the clutches of the higher income tax rate of 41 per cent.

The Ibec economist said the recovery had now “firmly taken hold” across the Irish economy, and that he expects consumer spending to pick up relatively quickly. The employers’ body said the economic turnaround had spread beyond the major cities and was now establishing itself in the regions.

Ibec believes that job creation will remain buoyant for the next two years at least, and that another 50,000 new jobs could be added this year.

Mr O’Brien suggested that official GDP data on the Irish economy was seriously underestimating the strength of the economic recovery: “I think the Irish economy is actually growing at between two and three per cent.”

1 Eason acquires rival Dubray Books for undisclosed sum
2 Solar panels: Are they worth the investment?
3 Bank leaked my loan request to family who tried to rip me off
4 When the Chemistry no longer works – the closing of a leading Irish ad agency
5 Stock markets tumble into the red for second straight day
6 Ryanair and Aer Lingus monitor impact of coronavirus on travel to Italy
7 Shares of Juventus FC down 14% amid coronavirus fears
8 Up to 5,000 engineering jobs expected to be created in 2020
9 Revolut valued at $5.5bn after latest fundraising
10 Can I see my father’s previous wills?
Real news has value SUBSCRIBE