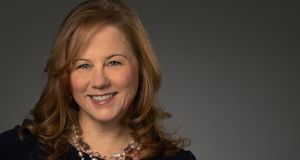 Employers’ group Ibec has hired a senior executive from the Canadian Chamber of Commerce to take up a new role as director of international business, based in Brussels.

Jackie King, the chief operating officer of Canada’s largest chamber, will take up the position on July 1st, to lead Ibec’s “international scaling strategy” through the “creation of new alliances and pursuing opportunities for commercial growth”.

In a note to staff on the appointment, Ibec chief executive Danny McCoy said Ms King would “advance our commercial internationalisation goal”.

Ms King joined the Canadian chamber in 2018, having spent 19 years with public relations and public affairs consultancy Hill + Knowlton Strategies. At the chamber, she was responsible for leading the executive and management teams in the development and execution of its strategic plan – overseeing operational and financial performance, and maintaining relationships with external stakeholders.

At Hill + Knowlton, she was senior vice-president and general manager of its Ottawa office.

Ibec represents more than 7,500 companies in the Republic, and has 36 trade associations. It also has an office in Brussels and connections in Washington DC and the UK. Its members employ about 70 per cent of the private sector workforce in the State.

In 2018, it spent €1.3 million on lobbying activities in the European Union, making it the third-highest spender among business representative groups across the member states.

1 Chris Johns: Economies may enjoy ‘roaring twenties’ if ministers learn lessons
2 Wet pub openings fuelled rise in Irish Covid infection rates – report
3 Basic income for all: Has the Covid crisis given us a new economic model?
4 How long can Government afford to keep State pension age at 66?
5 Profits jump threefold at LinkedIn’s Irish unit to $294.2m
6 Admission of mistake in Oxford vaccine dose raises doubts over reliability
7 White knights or loan book cannibals – what will happen at Ulster Bank?
8 Karlin Lillington: How I managed to cut my mobile phone bill by at least half
9 Oxford-AstraZeneca vaccine may be trialled again to prove results were ‘not a mistake’
10 Promontoria barred from pursuing doctor over Ulster Bank loan
Real news has value SUBSCRIBE