Growth in US producer prices at six-month high in October 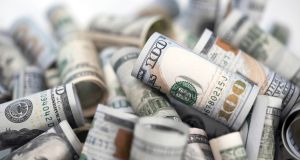 US producer prices increased by the most in six months in October, lifted by gains in the costs of goods and services, further bolstering the Federal Reserve’s stance that it will probably not cut interest rates again in the near term. The Labor Department said on Thursday its producer price index for final demand rose 0.4 per cent last month, the biggest increase since April, after falling 0.3 per cent in September. In the 12 months through October the PPI climbed 1.1 per cent, the smallest increase since October 2016, after advancing 1.4 per cent in September.

Economists polled by Reuters had forecast the PPI would rise 0.3 per cent in October and climb 0.9 per cent on a year-on-year basis. Excluding the volatile food, energy and trade services components, producer prices edged up 0.1 per cent after being unchanged in September.

The so-called core PPI increased 1.5 per cent in the 12 months through October after gaining 1.7 per cent in September. Annual core PPI also slowed last month as last October’s increase dropped out of the calculation.

The data came on the heels of a report on Wednesday showing a strong rise in consumer prices in October amid large gains in healthcare costs and prices of used cars and trucks.

The Fed, which has a 2 per cent annual inflation target, tracks the core personal consumption expenditures (PCE) price index for monetary policy. The core PCE price index rose 1.7 per cent on a year-on-year basis in September and has undershot its target this year. October PCE price data will be published later this month.

Separately, data from the the Labor Department said the number of Americans filing applications for unemployment benefits rose to a five-month high last week. However, this likely does not signal a shift in labour market conditions as claims for several states were estimated because of Monday’s holiday.

Initial claims for state unemployment benefits increased 14,000 to a seasonally adjusted 225,000 for the week ended November 9th, the highest reading since June 22, said on Thursday. Data for the prior week was unrevised.

The four-week moving average of initial claims, considered a better measure of labour market trends as it irons out week-to-week volatility, rose only 1,750 to 217,000 last week.

Still, layoffs remain low even as the pace of hiring has slowed from last year’s brisk pace, keeping the labour market on solid ground and reducing financial market fears of a recession. – Reuters