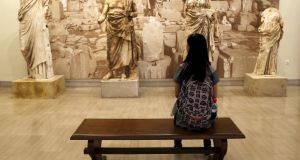 Greek myths: A sixth myth is that if Greece defaults, it would have to create a new currency and so leave the eurozone.

The Greek epic continues. It will not end well if the people involved do not recognise they are clinging on to myths. Here are six, each of which poses intellectual and emotional obstacles to reaching a solution.

A Greek exit would help the euro zone

For the English king, the gratification of his wish was a disaster. A similar thing is likely to be true if Greece leaves. Yes, if Greece suffered a calamitous aftermath, populist campaigns elsewhere would be less effective. But euro membership would cease to be irrevocable. Each crisis could trigger destabilising speculation.

A Greek exit would help Greece

Stable money counts for something, particularly in a mismanaged country. Ditching it carries a cost.

It is Greece’s fault

The 13th Labour of HerculesYannis Palaiologos

Then, in 2010, it became clear the money would not be repaid. Rather than agree to the write-off that was needed, governments (and the International Monetary Fund) bailed out the private creditors by refinancing Greece. Thus, began the game of “extend and pretend”. Stupid lenders lose money. That has always been the case. It is still the case today. Greece has done nothing

Greece has undergone a huge adjustment of its fiscal and external positions.

Between the first quarter of 2008 and the last of 2013, real spending in the Greek economy fell by 35 per cent and GDP by 27 per cent, while unemployment peaked at 28 per cent of the labour force. These are huge adjustments.

Indeed, one of the tragedies of the impasse over the conditions for support is that the adjustment has happened. Greece does not need additional resources.

The Greeks will repay

If so, banks would almost certainly have to impose a halt on withdrawals. There might even be a stop on payments.

Some argue that the ECB would have no more right to cease to act as a lender of last resort in relation to Greek banks than the Federal Reserve would have had to stop lending to banks in Detroit after its city government defaulted.

But there is a difference. No US bank was likely to be so exposed to Detroit as to be made insolvent by its default. But in the euro zone, which has 19 separate banking markets, one for each member, with the sovereign looming large in each, a default by a national government could bankrupt national banks. The ECB should not lend to clearly insolvent banks.

The question then would be how to respond. It might be possible to run the Greek economy with restricted functioning of its banks. The cash-starved Greek government might make payment with IOUs that it would accept in payment of obligations due to itself. While undesirable, this would be possible.

Such myth-busting will not give a satisfactory solution. But it would be a start. A deal containing a permanent reduction in the debt burden after completion of reforms in the Greek economy and polity would be the best outcome. Indeed, Palaiologos shows Greece has a development problem more than just one of economic reform. Such a deal would work only if Greeks were committed.

A seventh myth – possibly most dangerous of all – is that reforms agreed under duress work. They rarely do. If such an agreement could not be reached, the least bad outcome might be to accept the reality of default and leave Greece to decide what to do. That would surely be a bad outcome. But who is now confident of a better one? – Copyright Financial Times Limited 2015