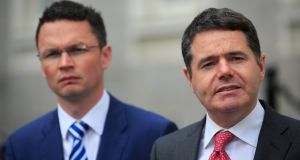 Patrick O’Donovan, Minister of State at the Department of Finance, and Minister for Finance Paschal Donohoe. Photograph: Gareth Chaney Collins

The Government spent almost €260 million more on attempting to tackle the housing crisis in the first half of this year than during the same period in 2016, official figures show.

Minister for Finance Paschal Donohoe published a mid-year review of Government spending showing that capital projects, including roads, houses and schools, cost €1.5 billion during the first six months of this year, some €304 million more than during the same period in 2016.

The review shows that the Department of Housing spent €312 million during that time, “€259 million ahead of the same period last year”. The document states that increased spending on the Government’s housing programme drove this increase.

Minister of State at the Department of Finance Patrick O’Donovan argued that Government efforts to tackle the crisis were beginning to have an impact. “You can see that in the commencement notices that are being filed with local authorities,” he said.

Commencement notices are formal notifications to local councils that someone has begun building a new house. In the 12 months to the end of May, local authorities received notices stating that work had started on 15,579 new homes in the Republic. This was 42 per cent more than during the previous 12 months.

Capital spending in the Department of Transport was €31 million ahead of what the Government expected by the end of June, largely due to work on connecting Dublin’s two Luas tram lines.

The Department of Health accounted for €7 billion of the total, which was €224 million more than during the first six months of last year, but €21 million below what was expected. The report states that it is critical the department stays within its budget for the rest of the year.

Social protection spending amounted to €9.9 billion, which was €56 million less than predicted. The social insurance fund has a €132 million surplus, largely down to income from pay-related social insurance receipts made by workers.

Mr Donohoe said the review confirmed that the Government was likely to spend €60 billion in total next year, 3.4 per cent more than the €58.1 billion earmarked for both day-to-day and capital spending in 2017.

The Minister explained that the review would help set the agenda for budget negotiations with his Cabinet colleagues. “It will set the basis for discussions that we will have in relation to expenditure in 2018, 2019 and beyond,” he said.

In a statement, Mr Donohoe explained that the review, the first of its kind, is meant to aid the Government in spending taxpayers’ money more efficiently.

“In this way we can keep our focus on the totality of Government expenditure and ensure that we are achieving the best possible value for the taxpayer,” Mr Donohoe said.