No Brexit deal could trigger ‘outright recession’ in UK 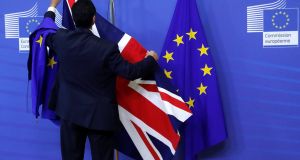 Brexit talks: Moody’s said the probability that negotiations could fail with no agreement being reached was still “substantial”. Photograph: Yves Herman/Reuters

Moody’s has warned of major macroeconomic disruption, including an “outright recession” in the UK, if the current Brexit talks fail.

The rating agency said its base case remains that both sides will come to an agreement covering most – but not all – of the current trade arrangements.

However, it said the probability that negotiations could fail with no agreement being reached was still “substantial”.

For the UK, such a “no deal” scenario would result in weaker macroeconomic outturns, including slower growth or outright recession as well as higher unemployment and inflation.

Possible restrictions on immigration could also exacerbate skill shortages in certain sectors. One key adjustment channel in these circumstances would be the exchange rate, which was likely fall sharply, Moody’s said.

On a corporate level, UK firms would be severely hit by trade disruption.

“A weaker economy would clearly weigh on corporate credit metrics, with reduced domestic demand eroding revenues and profitability,” it said.

Infrastructural operators in the UK, it said, would be hit in different ways with some only suffering moderately with others more severely impacted.

While domestically regulated networks and water companies would be insulated from cyclical developments, an economic slowdown might negatively affect UK bus and rail companies, for instance, albeit the impact would be partly mitigated by limited direct EU exposure.

For airports, aviation and ports, however, Moody’s said the impact could be more substantial “or even dramatic”, reflecting the loss of institutional arrangements that the UK enjoys as an EU member.

The agency predicts the impact of a no-deal scenario on financial services may be muted. “Though banks are likely to be negatively affected by Brexit, the incremental costs they will incur to mitigate the loss of revenues will be moderate and manageable,” its report said.

It said the most affected banks have acted swiftly to assess revenues at risk and fine-tune contingency plans.

“Insurers’ operations are unlikely to be materially affected, but capitalisation would weaken in case of prolonged and severe financial market volatility.”

The credit impact on clearing houses and other securities dealers and exchanges could also be limited, it predicted.