Global tax reform to be ‘re-energised’ under Biden, says Donohoe 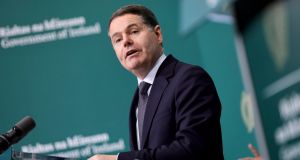 Moves to reform the global tax system will be “re-energised” under incoming US president Joe Biden, Minister for Finance Paschal Donohoe has said. But he that changes to the rules on how companies are taxed could cost the State up to €2 billion.

Publishing a report on the Government’s outlook for corporation tax and the changes made here in recent years, Mr Donohoe said it is vital to have a “consensus-based, globally agreed” approach to international tax.

While EU states are pushing harder for tax reform to replenish their Covid-depleted public finances, Ireland favours a broader global agreement, which includes the United States, under the auspices of the Organisation for Economic Co-operation and Development (OECD).

The departure from the White House later this month of President Donald Trump, who had pulled the plug on US engagement with the OECD process, makes progress on digital taxes and minimum effective rates now more likely.

This could mean a reduction in the level of profits taxable here and therefore a contraction in our corporation tax base.

The EU is expected to delay proposals for a digital tax – a high-stakes issue for Ireland because it hosts so many large tech multinationals – in lieu of a broader international agreement.

Mr Donohoe said he expected “heightened engagement” from the incoming US administration and that made agreement on reform proposals more likely in 2021 or 2022.

The Department of Finance estimates that proposed reforms could see the Republic’s corporate tax base shrink by between €800 million and €2 billion, albeit over a number of years.

However, Mr Donohoe said a more stable global tax system was better for Ireland even if it presented challenges.

“Tax rules need to continue to evolve to match the modern world, and that evolution can best take place through international agreement at appropriate institutions such as the OECD,” he said.

Amid speculation that Ireland might be pressurised to adopt greater reforms in exchange for EU support on Brexit, the Minister said in four years of meetings on both issues “they have never been linked”.

His corporation tax roadmap report outlines key actions taken by Government in recent years to update and reform the current corporation tax regime here, including the phasing out of the so-called double Irish loophole.

Corporation tax receipts hit a record €11.8 billion last year and now account for more than €1 in every €5 collected in taxes by the Government, with a small number of large multinationals contributing a substantial part of that tax take.

The State’s reliance on so few companies, makes the tax base highly unpredictable and vulnerable to shocks. The Government has been repeatedly been warned not to use the additional receipts for day-to-day spending.