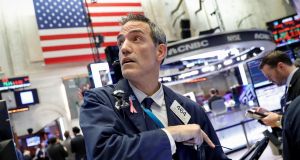 A wave of selling in global markets eased in Europe on Thursday, but a series of earnings reports from bellwether technology stocks, which have borne the brunt of the October sell-off, were expected to deliver a big test of investors’ nerves.

Wall Street futures pointed to a higher opening in New York after a sharp fall on Wednesday, where heavy selling of tech shares sent the Nasdaq down 4.4 per cent, its biggest one-day drop since August 2011.

But before US could recover on Thursday, the international rout hit Asian markets hard, with the region’s bourses again suffering the biggest drops in the downturn. The Topix index in Tokyo closed down 3.1 per cent, slumping to its lowest since September last year. Seoul’s Kospi dropped 1.6 per cent, taking it down more than 20 per cent from a 2018 high in January.

Investor sentiment shifted during the European trading day thanks, in part, to upbeat forecasts for fourth-quarter demand from German carmaker Daimler, and strong earnings from the third quarter from French peer Peugeot. US futures were also buoyed by Twitter, which announced strong earnings in a pre-market report.

The volatility gripping markets comes just ahead of Amazon and Google’s parent Alphabet announcing results after the closing bell in the US, following on from a string of disappointments from the semiconductor sector.

The US’s tech-heavy Nasdaq index is on track to post its weakest monthly performance since October 2008, while the S&P 500 has more than wiped out all of this year’s gains.

Earlier on Thursday, European shares sank as the heavy sell-off in US and Asian markets spread to the region and weak results from AB InBev and WPP among others underlined investors’ anxieties about slowing earnings growth in an uncertain political landscape.

The pan-European Stoxx 600 fell as much as 1 per cent before paring losses slightly to trade down 0.7 per cent shortly after markets opened. Germany’s Dax hit its lowest level since December 8th 2016 in early deals. The peripheral euro-zone indices of Spain and Italy bucked the trend, rising 0.3 per cent each in early trade.

Asian shares plunged overnight as hundreds of billions of dollars haemorrhaged from global markets after a rout in tech stocks inflicted the largest daily decline on Wall Street since 2011, wiping out all its gains for the year. Stock investors have become increasingly nervous about lofty equities valuations, a likely peak in corporate earnings momentum, faster rate hikes in the United States and an ongoing Sino-US trade war that threatens to hurt world growth.

MSCI’s broadest index of Asia-Pacific shares outside Japan skidded more than 2 per cent and has now lost more than 18.5 per cent of its value so far this year. Japan’s Nikkei tumbled as much as 4 per cent to a six-month trough while the Topix index plunged 3 per cent, evaporating more than $155 billion in market value. Chinese shares too were in the red with the blue-chip index plummeting as much as 2.5 per cent as fresh market-support measures by the Chinese government failed to ease worries about high leverage and the tariff war with the United States.

Earnings dominated the day with some heavy losses. WPP shares sank as much as 22 per cent at the open after the advertising group cut its outlook, reporting a sharp downturn in trading. The stock hit its lowest level since December 2012 and was down 16 per cent earlier. The plummeting stock dragged the media sector down 3.2 per cent, set for its worst day since the Brexit vote sell-off in June 2016. AB InBev shares tumbled 8.1 per cent after the Belgian brewing giant halved its dividend due to commodity price inflation and volatility in emerging markets.

Sweden’s Epiroc sank 11 per cent after the Swedish mining machinery maker reported third-quarter orders well below market expectations. Among gainers was Swedish retailer ICA, up 10.6 per cent at the top of the Stoxx after its third-quarter results. Finnish heavy machinery firm Konecranes also gained 8.3 per cent after reporting stronger-than-expected earnings.