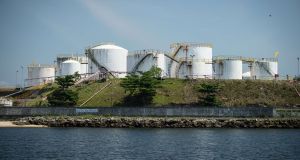 A slide in oil and commodity prices has weighed on smaller energy producers, primarily in the US, as big Opec producers continue pumping crude to maintain market share. (Photograph: YASUYOSHI CHIBAYASUYOSHI CHIBA/AFP/Getty Images)

Global debt markets are on the cusp of an unwelcome development with the number of companies defaulting on their obligations set to reach the century mark, driven largely by struggling US shale gas providers.

Currently, 99 global companies have defaulted since the year began, the second greatest tally in more than a decade and only exceeded by the financial crisis which saw 222 defaults in 2009, according to Standard & Poor’s. US companies account for 62 of this year’s defaults.

Investors have become increasingly concerned about the state of the credit market, reflecting how companies have borrowed heavily against the backdrop of low interest rates during the era of easy money. Since 2007, the proportion of corporate bonds S&P has rated speculative-grade, or junk, has climbed to about 50 per cent from 40 per cent.

Now, as markets anticipate the Federal Reserve will lift interest rates for the first time in almost a decade, the rise in defaults suggests a number of companies are being challenged by a sluggish operating environment, declining revenues and heavy debt loads.

A slide in oil and commodity prices has weighed on smaller energy producers, primarily in the US, as big Opec producers continue pumping crude to maintain market share. In the US, about three-fifths of defaults in 2015 have been among energy and natural resources businesses, including Midstates Petroleum, SandRidge Energy and Patriot Coal.

“The heart of the storm has been in commodities but it hasn’t been limited to just that,” said Raman Srivastava, deputy chief investment officer at Standish Mellon Asset Management. “It feels like every week there’s another company in the headlines. You hope it’s isolated but you don’t know.”

The jump in defaults has been reflected in the average yield on US corporate junk bonds, rising from 5.6 per cent at the start of 2014 to 8 per cent at present, according to Barclays.

The sell-off has been concentrated in the energy and materials industries and the average yield for junk bonds in the two sectors shot above 12 per cent last week; no other sector has a yield above the overall average.

Emerging market borrowers have accounted for 19 of the defaults — the second largest source of failures, Europe has counted 13 and the remainder are in other developed countries, such as Japan and Canada.

The number of weaker companies rated by the credit agencies has also risen from 167 in the previous quarter to 178. S&P defines these “weakest links” as borrowers with junk bonds rated B-minus or lower and at risk of further downgrade.

Diane Vazza, head of global fixed income research at S&P, said: “By most measures, the rising number of defaults in the near future likely will be muted by historical standards, but the current crop of US speculative-grade issuers appears fragile and particularly susceptible to any sudden or unanticipated shocks.”

Britain’s new immigration regime will damage much more than industry