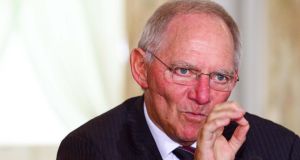 The draft Bill now goes to the German parliament for approval. It represents a further positive sign in Ireland’s campaign for ESM direct capitalisation for AIB and Bank of Ireland, retroactively, thus relieving the State of some of its investment in the banks.

A number of countries, including Germany, have to approve the ESM bailout fund’s new direct bank recapitalisation process before it enters into force in November.

A German finance ministry statement yesterday made no specific reference to the retroactive application of bank recapitalisation, which is the kind being sought by the Government.

However, Berlin sources confirmed this was part of the package agreed, in line with an EU undertaking last month to consider cases where “financial assistance has been provided to ESM members who recapitalised their institutions”.

The arrangement would allow capital to be replaced “in part or in full with a retroactive application of direct recapitalisation”, but says decisions will be taken on a “case-by-case basis by mutual agreement” of the ESM board of governors.

A number of countries, in particular Germany, have been cool on the concept of ESM recapitalisations in general, and retroactivity in particular. They have worked to ensure any such decisions at the ESM governing board will require unanimous agreement.

Finance minister Wolfgang Schäuble insisted yesterday legislating for direct ESM recapitalisations – until now rarely acknowledged as a looming political reality in Berlin – would did not open the floodgates and allow problem banks empty the rescue fund.

Only €60 billion of the ESM’s €500 billion fund is earmarked for direct bank recapitalisation.

“This is an important step to stabilise our financial sector . . . and to increase further the trust in our common European currency,” said Mr Schäuble of measures allowing the wind-up of financial institutions with so-called bail-ins of financial investors.

This would, he said, “rule out the risk that the taxpayer would have to accept liability as in the financial crisis”.

However the draft Bills agreed yesterday, which now go before the Bundestag, also expand the technical instruments available to the ESM bailout fund in line with the agreement reached by EU leaders two years ago and finalised by finance ministers last month.

Creating the ESM bailout fund was a hugely controversial move in Germany, forcing Chancellor Angela Merkel to insist the fund would not expose Germans to unlimited liability for others’ financial crises. For the last two years, German politicians have insisted in the domestic debate that direct bank recapitalisation was a red line to be crossed only in the distant future, with stringent conditions and only when all elements of the banking union was in place.

Yesterday officials said they were happy they achieved most of these aims in negotiations: the banking union is moving towards realisation and the fund earmarked for recapitalising banks is capped at €60 billion and can only be accessed as a last result, after banks exhaust a “liability cascade” of creditors, investors and national funds.

Irish officials say that the retroactive nature of the recapitalisation it seeks makes it impossible to implement the “liability cascade” model envisioned for future bank recapitalisations, thus allowing the Government go to fund directly.