Planet Business: The time for reallocating capital is now 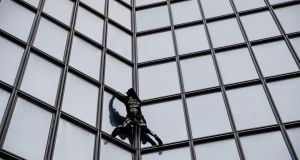 Image of the week: Total spider
What better way to spend a Monday than scaling the Total tower in Parisian business district La Défense? That’s what “French Spiderman” Alain Robert did in support of strike workers on the 40th day of nationwide protests against the French government’s pension reforms. Robert (57), who has no need of a harness or any safety equipment beyond chalk to stop his hands sweating, is a regular in these parts: this was the ninth time he went up the 187-metre tower without waiting for the elevator.

The urban climber, who raised his arms in triumph when he reached the top, has also done the Golden Gate Bridge in San Francisco, the Burj al Khalifa in Dubai and pretty much any skyscraper he fancies, usually without permission. “I am trying to use my fame for something I find meaningful,” he said. Pensioners should be able “to maintain a decent level of life”. His own retirement plans are unknown.

Number of cabin crew uniform designs Aer Lingus has had since its inception in 1936. The first one, a snazzy brown number designed by Sybil Connolly, was introduced (along with its first air hostesses) in 1945.

Years since the airline last introduced a new uniform, which like the version unveiled this week was designed by Louise Kennedy. The 1998 uniform succeeded an eight-year “blue period” for the airline.

There are this number of different pieces in the new uniform for cabin crew, which includes trousers for women for the first time and also (for only the second time) a dress.

Getting to know: Larry Fink
Larry Fink is worried about climate change and that’s a good thing as Larry Fink is the founder and chief executive of BlackRock, the world’s largest investment manager, which has about $7 trillion in asset under its management. Not all of those assets are planet-friendly, it is fair to say.

It currently holds close to 7 per cent stakes in oil giants ExxonMobil and Chevron and 6 per cent in mining company Glencore. Last year, its London offices were targeted by climate protestors, with ashes left outside the building in a plea for it to “stop financing deforestation”.

Now the US billionaire (67) believes the finance sector is “on the edge of a fundamental reshaping”, or so he wrote in his annual letter to CEOs. “In the near future – and sooner than most anticipate – there will be a significant reallocation of capital.” For BlackRock, what that means is divesting from coal producers and launching more sustainability funds that exclude fossil fuel companies.

Mark Zuckerberg’s new year’s resolution is to give up on new year’s resolutions – well, kind of. The Facebook founder normally does a post about the “personal challenge” he has set himself for the year ahead, but this year he’s decided to “think about what I hope the world and my life will look like in 2030”. So here, instead, are some of his greatest hits from Januarys past.

1. ”Build a simple AI to run my home.” This translated nicely into the headline: “Zuckerberg to build robot butler to look after his child.”

2. Only eat meat he kills himself. Who knew hunting was so popular in Silicon Valley?

3. Visit and meet people in every state in the US. This one, from 2017, was felt by many to be a quasi-presidential challenge, but that was before anyone had heard of Cambridge Analytica.

4. Read two books a month. A not especially onerous challenge, perhaps, but then Zuckerberg is kind of professionally obliged to spend all that time on Facebook.

5. “Get more comfortable with public speaking.” Not sure if this one has quite worked.