First-time buyers not to blame for previous bubble - Honohan 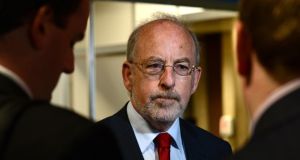 Central Bank governor Patrick Honohan has said the decision to allow first-time buyers some relief from the new 80 per cent loan-to-value limit was taken because those looking to get on the property ladder should not be unfairly punished.

Discussing the introduction of the new lending limits, which are expected to come into effect within a number of days, Mr Honohan said that first-time buyers were not responsible for the previous housing bubble.

“First-time buyers of the smaller houses never caused a boom and it is stopping a boom and preventing a credit chasing prices bubble that we’re trying to ensure against,” he said on Wednesday.

The new rules ensure that banks will be able to lend first-time buyers 90 per cent of the cost of a property up to a value of €220,000. Above that the 80 per cent loan to value limit will apply.

The move, which significantly reduces the deposit which first-time buyers have to save when buying a home, has been broadly welcomed.

While the decision to introduce the rules was made in order to avoid a new bubble, concern had been raised that a blanket 80 per cent limit would have made it extremely difficult for first-time buyers to save enough for a deposit.

Speaking on RTE’s Morning Ireland on Wednesday, Mr Honohan said the decision to set the cut-off point at €220,000 was taken because about half of the houses currently being bought by first-time buyers in Dublin are below this price point.

He said the new measures were being introduced as a preventative measure to prevent another housing bubble. Mr Honohan added that while there’s been a “spectacular” bounce back in prices in the capital, he didn’t believe we were witnessing another boom.

“There’s no bubble right now, it’s a precautionary measure,” he said. “But a bounce back could get out of hand which is why we needed to act now before that psychology of panic and the need to get into the market took hold.”

Mr Honohan said the new measures would bring clarity for the construction sector, but added that more action needed to be taken to increase housing supply in Dublin.

He said that no specific measures in relation to people in negative equity had been taken because the number of mortgage holders in this situation had declined recently.

Minister for Health Leo Varadkar said that while the new measures would help avoid another bubble, more needed to be done to address the issue of supply.

“Obviously one of the things that is necessary to make sure that we don’t have house prices spiking again in the city in particular is an increase in supply. We need to start building new houses again,” he said.

“But I do think that if you go back 10, 15 or 20 years ago where it wasn’t unusual for people to have to have a substantial deposit before they bought a house and banks were restricted in how much they could lend in terms of the multiple of your income, then (the measures are) prudential. It’s not just about protecting the banks, it is also about protecting the public from another credit-fuelled property boom, which is in nobody’s interest,” he added.

Fianna Fáil welcomed the easing of restrictions in relation to first-time buyers but expressed grave concerns that thousands of other buyers could end up trapped due to the onerous 20 per cent deposit rule being introduced.

Sinn Féin gave a broad welcome to the new limits, saying that such regulations would have a crucial role to play in creating a normal healthy lending market that is not based on runaway property prices fuelled by credit.

However, he added that the debate surrounding the introduction of new rules had brought to the fore the failure of the Government to provide social housing and a functioning rental market.

New Beginning, an organisation that assists people with mortgage difficulties, said the new lending rules are not a panacea and added that the property market remains dysfunctional.

The Society of Chartered Surveyors Ireland (SCSI) said that new residential lending rules would protect against some of the risks associated with lending but are likely to negatively impact some segments of the market.

The organisation welcomed the fact that there is now clarity on what the rules will be and said it agreed with them in principle. However, it added it was concerned about the impact the new limits would have on the rental market.

Piba, the country’s largest group of financial brokers representing 890 member firms, said the new lending limits were premature and would force behavioural and cultural changes in the Irish market.

“Mortgage lending restrictions already introduced since the financial crisis began, in our view, obviate the need for these additional curbs now, whatever about at a future point. The 3.5 times loan to income limit is simply not necessary with the current lending practices that are in place,” said chief operations officer Rachel Doyle.

“The new rules will have a dampening effect on mortgage lending and will, as a result, intensify demand for rental, pushing up prices and making it even more difficult for people to save for deposits,” she added.