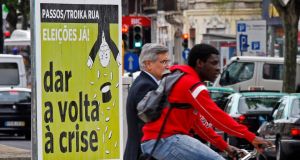 People pass by a political poster reading: “Troika out. Elections now. Turn the crisis around. Cut the debt and not the salaries”, on a street in Lisbon earlier today. Photograph: Jose Manuel Ribeiro/Reuters


Portugal has issued its first new government bonds since requesting an international bailout two years ago, in an offer of 10-year debt that raised €3 billion and was several times­subscribed.

Yesterday’s syndicated issue was a crucial milestone in the crisis-hit euro zone country’s bid to regain full access to international debt markets ahead of its planned exit in June 2014 from a three-year bailout programme.

Vítor Gaspar, finance minister, said demand from investors was more than three times higher than the €3 billion on offer. Portugal had met its financing needs for this year and was “pre-financing” 2014, he said.

Investor demand was broadly spread across Europe and the US, according to bankers.

The yield was fixed at the midswaps market rate plus 400 basis points, offering a return of about 5.7 per cent.

The yield, although still high compared to Ireland’s 4.15 per cent bond pricing in March, was half that seen in the secondary market a year ago and below the so-called danger zone that starts at 6 per cent.

“There is no other market where you can get this kind of yield,” said Philip Brown, head of sovereign capital markets at Citigroup.

The issue’s successful launch triggered fresh falls in borrowing costs for other southern euro zone countries. Yields on existing Portuguese 10-year bonds, which move inversely with prices, dropped below 5.5 per cent yesterday, the lowest since late 2010. The euro zone debt market has rallied since a pledge last year by Mario Draghi, European Central Bank president, to do “whatever it takes” to save the euro.

Portugal “could have done more than €3 billion but they didn’t want to put too much pressure on the market”, said Zeina Bignier, a senior banker at Société Générale.

The finance ministry said foreign investors accounted for 86 per cent of the placement, led by British investors, who took up 27 per cent.

In January, Lisbon reopened a five-year bond and raised €2.5 billion in its first long-term debt issue since it had to resort to the € 78 billion EU/IMF aid programme in May 2011.

Joao Moreira Rato, head of the government’s IGCP debt agency, said Portugal “will be in the market more regularly from now on”, possibly reopening existing bonds like in January or holding auctions. “We will act more like we used to act before the bailout.”

Concerns over Portugal’s deep recession and domestic opposition to the austerity programme mandated under the bailout had pushed the yield above 6 per cent last month – still just a fraction of the 17 per cent it hit in early 2012.
– (The Financial Times Limited/Reuters)