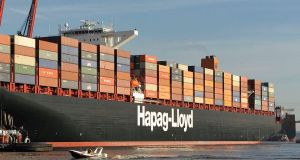 The UK economy will avoid another recession and exports will help propel a "modest" recovery this year, according to the British Chambers of Commerce.

The chamber's gauges of domestic and foreign demand at manufacturers and services companies all rose last quarter, the London-based group said in a report today, with the export measures close to a record.

"Fears of another recession are calmed by our results," BCC chief economist David Kern said. "The economy's performance is weak by long-term historical standards. However, while remaining below trend for some time, growth is likely to stay in positive territory."

The Bank of England will leave its target for stimulus unchanged at £375 billion after a two-day meeting that starts tomorrow, according to Bloomberg.

The chamber's gauge of domestic manufacturing orders rose to 14 last quarter from 3 in the previous three months, while the export measure increased to 22 from 11.

Within services, domestic orders rose to 11 from 7 and export orders surged to 26 from 18. Most gauges of confidence also improved, with the outlook for profits at the highest in more than five years, according to the BCC, which surveyed 7,265 companies between February 18th and March 11th.

In a separate report, Lloyds TSB said its business confidence index rose to a four-month high of 20 in March from 13 in February.

A measure of the outlook for business over the coming year also improved, to 41 from 32.

1 Brexit: System agreed for Irish goods to skip checks on UK trade
2 High Court appoints interim examiner to Compu b parent company
3 Ireland faces 'deep downturn' this year and may not rebound until 2024 if there is a second wave
4 Could your old car be giving away all your secrets to its new owner?
5 How much do Irish people earn? And what will Covid-19 do to our wages?
6 Former Worldspreads chief Conor Foley faces €730,000 fine
7 Why are markets booming when a crash is on the way?
8 ‘The rental situation stops me moving back home’
9 Second Covid-19 outbreak and no-deal Brexit an appalling vista
10 Red tape logjam creates fear for Irish timber supply
Real news has value SUBSCRIBE