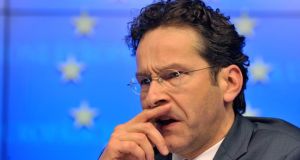 Six months ago nobody outside of the Netherlands had ever heard the name Jeroen Dijsselbloem.

Even here he was relatively unknown: a Labour MP with a degree in agricultural economics who had worked as an advisor with the ministry for agriculture – and no ministerial experience.

It has been an early object lesson in the need to weigh each and every word, especially in the middle of a crisis – and the politically “explosive” consequences if he does not.

On Monday Dijsselbloem sent the markets tumbling when he suggested that the tough bailout terms imposed on Cyprus could become the “model” for rescuing other, larger, economies.

He said this despite having maintained earlier that Cyprus, with its wealthy and often-questionable Russian connections, was a special case.

Specific case
As share prices plunged across Europe in response, and the euro fell against the dollar, the eurogroup was forced to issue a two-line statement confirming that Cyprus was, in fact, “a specific case”.

The statement added that “macro-economic adjustment programmes are tailor-made to the country concerned, and no models or templates are used”.

So how was it that Jeroen Dijsselbloem, Dutch politician of limited domestic experience, ended up in a pivotal role at the centre of power in Brussels as the single currency fights for its survival?

Largely it has been about being in the right place at the right time.

As Labour’s spokesman on education, he was well positioned for preferment when his friend, Diederik Samsom, succeeded the veteran Job Cohen as party leader a year ago this month.

It was that personal alliance, along with his willingness to champion austerity and a dearth of more experienced Labour names, which won him the finance portfolio when Labour became junior partners in a new coalition government with prime minister Mark Rutte ’s Liberals (VVD) six months later, in October.

From there the unlikely Dutch finance minister went on to become an equally unlikely contender to succeed Luxembourg ’s prime minister Jean-Claude Juncker as president of the eurogroup of finance ministers of the 17 countries of the single currency – the eurogroup began life in 1998 as an ad hoc group, finally formalized by the Lisbon Treaty in 2009.

German chancellor Angela Merkel took the view that the new eurogroup president should come from a country which retained its triple A international credit rating, limiting the field to Germany, Finland, Luxembourg and the Netherlands.

Power in Berlin
Germany’s redoubtable Wolfgang Schauble would have been seen as concentrating too much power in Berlin.

French finance minister Pierre Moscivici was excluded because France had been downgraded.

As a result a compromise candidate, Jeroen Dijsselbloem, backed by Germany, was the unlikely victor, taking over on January 21st.

Because it is essentially a euro zone sub-group of the 27 EU ministers for finance, Dijsselbloem found himself, just two months later, chairing the talks on a bailout for stricken Cyprus.

This is despite the fact that Ireland currently holds the EU’s rotating six-month presidency and Michael Noonan chairs meetings of the 27 finance ministers.

Asked in 2011 why he had lied about a secret meeting to discuss the Greek sovereign debt crisis, he replied jokingly: “When the going gets tough, you have to lie.”