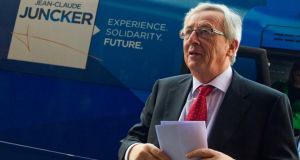 The euro fell to a two-month low against the yen and European government bonds strengthened yesterday, amid renewed expectation that the European Central Bank will implement stimulus measures at its next rate-setting meeting in June, including a cut in interest rates.

ECB executive board member Peter Praet told German newspaper Die Zeit that negative deposit rates was one of a number of measures being considered by the bank.

“Negative deposit rates are a possible part of a combination of measures,” the ECB chief economist told the paper. “We are preparing a number of things,” he added, including interest rate cuts or a long-term refinancing operation.

Reuters reported a cut in interest rate was “more or less a done deal”, citing five sources familiar with the matter.

The bank is understood to be considering a possible cut to all three interest rates, bringing the deposit rate into negative territory for the first time, a move that would be likely to affect exchange rates. The ECB has been criticised, particularly by France, for not tackling the strengthening euro.

In addition to interest rate cuts, the ECB is likely to unveil a new long-term refinancing operation programme – whereby the ECB provides finance to euro zone banks – which would come with the condition that banks borrowing from the ECB must increase lending to smaller businesses. As an alternative to the long-term refinancing programme, the ECB could also announce an asset-backed securities purchase plan that would see the ECB buy bundled packages of SME loans.

With the rate on deposits now at zero, a cut next month would make the ECB the first major central bank to experiment with negative interest rates. Officials hope this move will raise inflation by weakening the euro and by making imports more expensive.

The euro area has been battling with persistently low inflation levels, raising the prospect of a Japanese-style era of deflation.

Low inflation
Inflation across the 18-country euro zone was 0.7 per cent in April, well below the ECB’s mandate to keep inflation “close to and below” 2 per cent.

The German central bank has also said it may back purchases of private-sector assets. However, it has signalled its support for more unconventional moves depends on how forecasts for inflation for 2016 will change. While the June projections will almost certainly downgrade the outlook for inflation in 2014, economists are split on forecasts for 2016.

Mr Praet played down prospects of a quantitative easing programme, as has been initiated by the US Federal Reserve. – Additional reporting: Copyright The Financial Times Ltd 2014

1 My aunt never told us that Gran passed away with no will
2 Ryanair and Aer Lingus cut flights as travel restrictions continue
3 Ireland’s age of retirement must be pushed out, watchdog warns
4 If it’s safe to do so, could this be the time to spend for Ireland?
5 Private investors acquire prime Dublin 2 assets as lockdown lifts
6 Political row brewing if Ireland loses its appeal on Apple
7 The $6bn judgment pitting Nigeria against Irish businessmen
8 Dublin banker sells island off coast of west Cork for €5.5m
9 Republic risks becoming ‘Europe’s North Korea’ on air travel, says Aercap chief
10 Green light for 1,102 residential units on Old Naas Road
Real news has value SUBSCRIBE