EU washing its hands of responsibility for growth 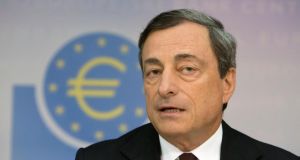 Mario Draghi: until the ECB president’s most recent speech there has been no acknowledgement of the need to run growth at a higher rate or even of the possibility that fiscal austerity can damage growth in the short-term.

Economists often complain that they can’t do laboratory experiments, something which explains why the profession only pretends to be a science. Because evidence – data – is so sparse, many controversies remain unsettled. However, the current extraordinary developments in the British labour market might be one occasion where we can point to definitive results of an unusual lab-style investigation.

The number of jobs created by the British economy over the past few years has astonished everybody. And it is not just a story about what happened during the recovery from the financial crisis: the rise in unemployment during the recession was muted – it was less than forecast and stands in stark contrast to the experience of the euro area. For each percentage point of GDP lost by Britain during the downturn, it shed fewer jobs than virtually any other country

Unemployment rates in Britain (6.4 per cent) and the US (6.2 per cent) are now virtually the same. In the euro area the rate stands at 11.5 per cent. But the new chairwoman of the Federal Reserve, Janet Yellen, is reluctant to raise interest rates notwithstanding very low unemployment because there is, possibly, a large “reserve army” of workers not captured by the headline statistics. In Britain, the main reason why two central bankers want an immediate interest rate rise is precisely because there isn’t a large pool of unemployed people, properly measured or not. Which raises a difficult question: if jobs are so plentiful in Britain why are wages not surging? The only reason why British interest rates are not already higher is that wages have actually been falling.

There are two factors at work here. First, the cumulative effects of 30 years of structural reforms in the labour market have had a major impact on labour supply. There is debate about the impact of Thatcher-era reforms or whether more recent welfare-to-work initiatives are having a bigger effect. But it is clear that significant numbers of people are responding to the welfare system’s reforms.

Unsurprisingly, there are plenty of arguments about whether those changes are more stick than carrot: they include benefit caps, retraining opportunities and attempts to end “welfare traps” (where people lose out when returning to work). But the key takeaway is that the reforms are having a significant impact.

Britain’s experiment with labour market reforms has been a success. Debate is focused on how those reforms have worked: changed welfare rules may have “persuaded” people back to work or may have lowered real wages (or both). Economic growth has helped, but the recovery in GDP has been muted. Whatever the precise channel, the effects are, for once, clear and unambiguous: jobs are plentiful. And the role played by the central bank should not be ignored: it has kept the economy going – and fiscal austerity has been more talked about than implemented.

If we want to solve the jobs crisis we either have to implement labour market reforms, sit on wage growth or grow the economy at a much faster rate.

If we want a jobs miracle, do all three. That’s it.

Fiscal fundamentalism, by contrast, sees economic salvation in balanced budgets and lots of rhetoric (with zero action) on labour market (and other) reforms.

Until Mario Draghi’s most recent speech there has been no acknowledgement at all of the need to run growth at a higher rate or even of the possibility that fiscal austerity can damage growth in the short term. Europe’s policy bankruptcy sees supply side remedies as the answer to demand shortfalls, fiscal restraint as the cure for all ills; the elites espouse a belief in structural reforms but do precisely nothing. Meanwhile, on some measures, Europe’s loss of output and jobs is now worse than experienced during the 1930s.

Economic policy matters, a lot, both in the short and long term. Continuously calling for balanced budgets and politically difficult labour market reforms while washing your hands of all responsibility for boosting growth is cowardly and intellectually shoddy. It is, in the end, self-defeating. We have the evidence to prove it.